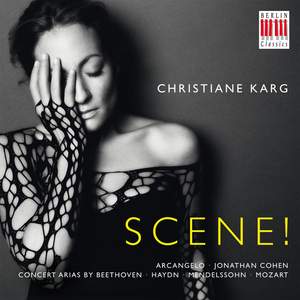 LOST SOULS! Emotional scenes that tear at the heart strings: concert arias are great dramas reduced to a few minutes and focussed on one single character. But what is the origin of the genre? And what inspired the great composers, stimulated by great voices and great moments in literature or even by the operas written by their fellow musicians? What they composed were moving, dramatic scenes for the concert hall, and they gave their all in creating them.

Christiane Karg is one of those fascinating voices, and who knows which concert arias Haydn or Mozart might have written for her? She is certainly one of today’s most interesting German singers with an international profile.

After studying in Salzburg her career initially took off in Hamburg and Frankfurt. Her solo career has since taken her to the Semperoper in Dresden, to Salzburg, Covent Garden and Glyndebourne, and the list of her stage partners is clear evidence of her elevated status.

Following her highly acclaimed Strauss Lieder album, her fourth CD is a new orchestral recording on which the soprano chooses the tried and trusted Arcangelo ensemble with its conductor Jonathan Cohen to accompany her, as was the case on her “Amoretti” album. After winning the coveted Echo Award for her debut album, “Amoretti” gave her the breakthrough into the CD market.

“Scene!” is the title of her new CD, and it demonstrates how her voice has developed – something she describes in the booklet in these terms: “After my CD of Mozart and Gluck arias I thought it was the right time to take a step outside the Classical world and to explore the fach in more detail, without suddenly turning into an Isolde.”

What fascinates her about these particular arias? “Large‐scale emotions in a small space with lost souls at the centre – forlornness that can also turn to hatred. That’s what it’s about and that’s what I want to demonstrate.”

Well then: curtain up for Christiane Karg!

Well planned and superbly executed, with nothing putting Karg beyond her comfort zone, even as she steps into a dramatic fach, which she says is new to her. It’s a wonderfully clear, expressive soprano, beautifully accompanied by Arcangelo.

Throughout, Karg holds vocal finesse and expressive intensity in near-ideal equipoise...Singing with style, grace and fiery temperament, Karg brings each of these distraught heroines excitingly, individually alive, while the superb players of Arcangelo - not least the dulcet clarinets - are true dramatic partners rather than mere accompanists.

There’s a lovely sense of exploration and discovery about this project, both in terms of the repertoire and Karg’s own vocal qualities...we’re clearly in the presence of a singer who knows her instrument inside out and husbands her resources judiciously in service of the music rather than blowing a gasket trying to emulate her predecessors.

Karg’s lighter timbre is tested, not uncomfortably, by the [Beethoven's] range and intensity, but she comes into her own in Mozart’s sublime Ch’io mi scordi di te... Haydn’s Scena di Berenice and Mendelssohn’s Infelice are sung with an intensity to match Janet Baker’s. Fabulous.

[this CD] finds her reinforcing her Mozartian credentials while seemingly auditioning for the more dramatic roles she will surely get in the not-too-distant future. Karg’s soprano has a metallic gleam that cuts through the buoyant ensemble playing of Arcangelo, who, directed by Jonathan Cohen, are responsive to all the scenery-chewing moodswings.