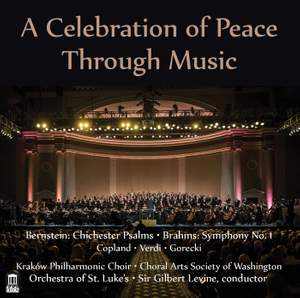 A Celebration of Peace Through Music (Live)

Delos – a long-standing champion of great music’s therapeutic and healing powers – is delighted to release this remarkable musical celebration of peace.

Distinguished conductor Sir Gilbert Levine’s career is particularly notable for his many concerts with major orchestras that have been widely broadcast on PBS. This Jewish musician’s activities have largely focused upon interfaith concerts of spiritually potent music celebrating universal human themes and values.

The performances preserved here – recorded in concert at Washington DC’s DAR Constitution Hall – celebrate the canonization of two recent Popes: John XXIII and John Paul II. This “Pope’s Maestro” became a friend of the latter “Polish Pope”, which led to a series of similar events at the Vatican and elsewhere. The reigning Pope Francis is also honoured.

The peace-themed program includes well-known music by Copland, Verdi, Gorecki, Bernstein and Brahms. Meticulously recorded and filmed for repeated major-metro domestic PBS broadcasts (also in Europe) through 2017, these masterpieces are heard in glowing renditions by the vaunted Orchestra of St Luke’s plus the two fine choirs.