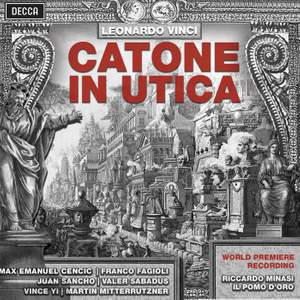 Director Riccardo Minaso heats up [the] sense of rivalry - the variations get wilder, the yearning more palpable. All three countertenors are virtuosos, but Fagioli takes the laurels…the band... — BBC Music Magazine, September 2015 More…

Katherine listens to a show-stopping revival of a lost Baroque masterpiece by star countertenors Max Cencic and Franco Fagioli.

World premiere recording of an opera by a Neapolitan master fast gaining a first-rate modern reputation. Max Emanuel Cencic gathers around him an intoxicating mix of stratospheric countertenors, a top tenor, and an orchestra who sizzle with excitement for a performance of an opera that will appeal to all fans of Baroque music’s unsung heroes.

As March’s ‘Five Countertenors’ album showcased, the age of the countertenor is here. Max Emanuel Cencic has gathered around him, once again, a superb cast to bring Vinci’s “Catone In Utica” to vivid life.

“Vinci is the Lully of Italy: true, simple, natural, expressive”- for generations Leonardo Vinci was just another obscure Baroque composer: this first-rate recording will lift the veil from this forgotten genius of Italian opera, and from the mysterious all-male world of the 18th-century Roman stage.

With a libretto by Metastasio, Vinci’s opera was unveiled in Rome in 1728 with an all-male cast (women having been banned from the stage by the Pope): countertenors took the three heroic male roles as well as the female parts.

As well as Cencic (Arbace), the other superb countertenors are Franco Fagioli (Cesare), Valer Sabadus (Marzia), and Vince Yi (Emilia). Tenor Juan Sancho takes the title role (Catone) in this stage work about Julius Caesar’s defeat of the Republican forces led by Marcus Portius Cato in 46BC, and Riccardo Minasi, who enjoys a considerable reputation for his recordings of Baroque repertoire, conducts.

Director Riccardo Minaso heats up [the] sense of rivalry - the variations get wilder, the yearning more palpable. All three countertenors are virtuosos, but Fagioli takes the laurels…the band contributes enormously throughout, its brash exuberance alternating with continuo realisations as delicate as they are original…[a] superb premiere recording.

there is no disputing everyone's complete dedication to the cause. Cencic's firm yet sensitively balanced singing conveys the pathos of Arbace's numerous expressions of unrequited love...Sancho's beefy tenor aptly characterises Cato's scepticism about reaching a diplomatic resolution...Il Pomo d'Oro, directed by Riccardo Minasi, vividly characterise each scene with theatrical zest.

Fagioli certainly comes and conquers as Caesar, arresting attention from the moment he enters and establishing the character’s authority and compassion in his long opening exchange with Catone...the new voice which really captivated me was that of the young Austrian tenor Martin Mitterrutzner, in the relatively thankless role of Caesar’s general Fulvio...Cencic himself excels as the lovelorn, borderline masochistic Arbace.

Max Emanuel Cencic and Valer Sabadus are easier on the ear than Franco Fagioli and Vince Yi. Juan Sancho’s Cato is commanding.