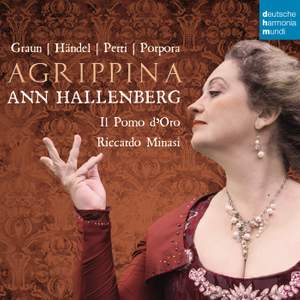 The programme presented by Ann Hallenberg for DHM is a homage to the historical roman figure of Agrippina, one of the earliest historical women to inspire the fantasy of librettists and composers. Ann Hallenberg and a team of musicologists researched the musical archives to unearth all surviving operatic manuscripts containing the figure of Agrippina. Twelve of the arias are WORLD PREMIERE RECORDINGS. Apart from Handel’s famous opera ‘Agrippina’ and Telemann’s ‘Germanicus’, all music on this album has been recorded for the first time. This album is also a fascinating journey through the history of baroque opera. The earliest piece, Legrenzi’s ‘Germanico sul Reno’ dates from 1676 and is a typical example of early baroque style. The latest work, Graun’s ‘Britannico’ from 1752, was written only four years before the birth of Mozart, at the very end of the musical baroque period.

Hallenberg is on scintillating form, fluent alike in bravura, of which Graun's 'Mi paventi' with horns provides a dazzling example, and cantilena. The instrumental support provided by Il Pomo d'Oro under its director Riccardo Minasi is generally crisp and alert.

With her gleaming high mezzo, evenly produced over a wide range, dazzling agility (no hint of aspirates in the reams of coloratura) and specific sense of character, Ann Hallenberg does this trio of ladies proud...an enterprising recital of fine, largely unknown music, performed with style, flair and tonal beauty by a mezzo unsurpassed in Baroque opera today.

Hallenberg's singing pf this kind of repertoire is today simply peerless, while the considerable interest of the concept only adds to the value of a disc that is scarcely less than a treasure.

she delivers splendid accounts of the lilting Ogni vento, a searing Pensieri and a deliciously airy L’alma mia fra le tempeste, which make one hope for a complete recording...Hallenberg’s singing both moves and dazzles, while Minasi’s band is deft and stylish.

singers will be queueing up to include Mi Paventi from Graun’s Britannico in their recitals, and there’s an equally dazzling vengeance aria by Orlandini, in which Riccardo Minasi’s orchestra, Il Pomo d’Oro, really lets fly. Hallenberg is as convincing in these as she is in the more reflective numbers, and her three arias from Handel’s opera are very classily done, too.