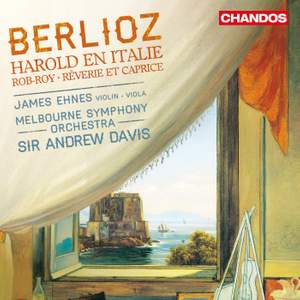 Davis and his production team have worked hard to keep James Ehnes's quite ravishingly beautiful playing in focus..It sounds as if Davis sees the work as more lyrical and Romantic...than as a... — Gramophone Magazine, July 2015 More…

The virtuosic and nine-times Juno-winning Canadian James Ehnes is centre stage in a new recording of orchestral works by Berlioz, with the Melbourne Symphony Orchestra conducted by Sir Andrew Davis. This recording follows an extraordinarily rare concert in November 2014 with the same forces, in which James Ehnes played two Stradivarius, respectively a viola in the solo part of Harold en Italie – ‘symphony with a principal viola part’ in Berlioz’s words – and a violin for the solo in Rêverie et Caprice, both of which feature here.

Berlioz was never ashamed to recycle his music from one work to another, especially when the earlier work had been rejected by the public or by the composer himself. In 1834, Paganini asked Berlioz for a work in which he could display his power on a fine Stradivarius viola. Berlioz then composed the four-movement symphony Harold en Italie, incorporating passages from the Rob-Roy ouverture which he had recently rejected.

Similarly, Rêverie et Caprice was the form eventually given to an aria from the opera Benvenuto Cellini, unceremoniously booed in Paris in 1838. Berlioz transformed it into a violin solo piece three years later. It is the only piece Berlioz ever wrote for solo violin.

Davis and his production team have worked hard to keep James Ehnes's quite ravishingly beautiful playing in focus..It sounds as if Davis sees the work as more lyrical and Romantic...than as a sequel to the experimentation of the Fantastique...he sets his soloist off well and gives worthwhile accounts of the shorter pieces.

Ehnes’s viola-playing is warm and expansive, but it is in the relatively compact Rêverie et Caprice that he is at his graceful best, gliding through mercurial moodswings and maintaining a notably lyrical line.

[Ehnes] is the protagonist in this all-Berlioz programme, but the disc is equally distinguished by the lucid, exhilarating, smoothly contoured playing of the Melbourne Symphony Orchestra under that experienced Berliozian Sir Andrew Davis.