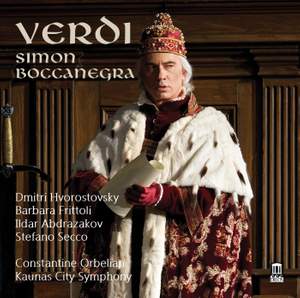 It is obvious [that Hvorostovsky] has thought deeply about Boccenegra and is absolutely inside the character; he is also able to realise his portrayal with an impressive largesse of tone...Abdrazakov... — BBC Music Magazine, August 2015, 4 out of 5 stars More…

Our first-ever full-length Italian opera recording, Delos’s star-studded current release of Giuseppi Verdi’s Simon Boccanegra promises to make quite a splash among today’s opera fans. As Verdi was entering his glorious “late period” (Otello and Falstaff) he wrote and re-worked much of Simon Boccanegra, a work that he had first tackled in 1857. The opera emerged in 1881 as a powerful masterpiece, although one that has been unfairly neglected, in comparison with Verdi’s other works on that level. So it’s high time for an authoritative new release of an opera that gives glamorous title star Dmitri Hvorostovsky – considered by many to be the world’s greatest Verdi baritone – the chance to record what he calls “…one of the most complex, deepest characters in the whole baritone repertoire.”

Hvorostovsky goes on to say, in a special introduction he wrote for this album, that among his favorite scenes in the opera is the Council Chamber scene: “Simon’s address to the people, ‘Plebe! Patrizi! Popolo!’ is the creed of a great statesman. As he cries for peace and love, the whole crowd is swept along by the same surge of passion!”

It is obvious [that Hvorostovsky] has thought deeply about Boccenegra and is absolutely inside the character; he is also able to realise his portrayal with an impressive largesse of tone...Abdrazakov offers immense dignity and presence as Boccanegra's implacable enemy, Fiesco...Frittoli can rely on her ample, flexible lyricism, though she's not always ideally secure at the top of her range.

While Hvorostovsky's famous breath control is hugely welcome in Verdi's expansive vocal lines, one heas that virtue mostly in his upper range, always the best part of his voice...Stefano Secco is a clean lyric tenor who does the work of a much heavier voice...Frittoli remains afflicted with a wide vibrato in her upper range...Then again, she blends well with Secco...while not a first-choice recording, it's often an interesting one.

The passages in which the velvety authority of Hvorostovsky’s baritone is properly captured are enough to make one wish that he had been surrounded with better support. Only the Fiesco of bass Ildar Abdrazakov, whose singing sometimes puts Hvorostovsky’s drier moments into unflattering relief, is convincingly in his league.