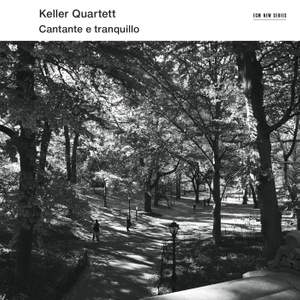 it's all expertly played, even if the Bach is more Romantic in its use of vibrato than might be expected nowadays. — BBC Music Magazine, August 2015, 5 out of 5 stars More…

Knaifel: In Air Clear And Unseen

Kurtág: Flowers We Are - for Miyako

‘Cantante e tranquillo’ is an exquisite album of slow movements mostly written for string quartet which takes its title from Beethoven’s marking for the lento of his final Quartet, Op 135, two performances of which bookend the disc. In between comes music by Bach, Ligeti, Kurtág, Schnittke, Knaifel - plus more Beethoven.

Producer Manfred Eicher explains the genesis of the recording: “In conversation with András Keller [leader of the quartet] we envisioned a musical programme based entirely on slow movements. Together we began reviewing the recordings we had made over the last 20 years, juxtaposing works of different historical eras, uncovering correspondences between composers of the past and the present.

“As a contextual frame for the project we decided to record the slow movements of Beethoven’s op.130 and op.135, added new recordings of Kurtág and integrated newer and older interpretations of Alexander Knaifel, Ligeti and Bach to the album. This personal selection of remarkable music documents the ensemble’s growth, always approaching the work with both integrity and imagination, rooted in the gesture of listening.”

And Wolfgang Sandner concludes his liner note: “A wistful charm imbues this entire recording of pieces which, though not written together, seem to have been predestined for each other. The sounds are self-evident and self-explanatory. We hear them as music, as beautiful music, as great music.”

The Keller Quartett was founded in 1987 in Budapest at the Liszt Conservatory of Music, where its members studied with Sandór Devich, András Mihály and György Kurtág. All three of these distinguished professors were mentors, and Kurtág continues to compose music for them. Besides the composers on this album, members of the quartet have also been heard on ECM recordings of Bartók, Shostakovich and Barber.

it's all expertly played, even if the Bach is more Romantic in its use of vibrato than might be expected nowadays.

Highlights are the hypnotic pastoral from Schnittke’s Piano Quintet with Alexei Lubimov, and a sequence of Kurtág miniatures. Good for a quiet night in.