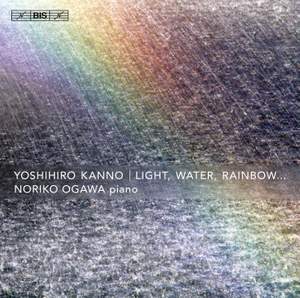 Kanno: The Remains of the Light III, "Angel's Ladder"

Kanno: A Particle of Light

Kanno: A Particle of Water

Kanno: A Particle of Rainbow

In his compositions Yoshihiro Kanno bases himself on three idioms: Western instrumental music, Japanese traditional instruments, and computer music. Combining these various elements freely, as in the recent work Himiko – Memories of the Sun Goddess which fuses Western classical music and Japanese traditional music with Kabuki and Japanese classical dance. The pianist Noriko Ogawa is a champion of Kanno's music and has commissioned three of the works on the present disc, including the so-called 'Particle of Piano' series. The 'Particle series' is framed by two works which both incorporate computerized sounds – in the case of the opening Angel's Ladder it is the sound of the piano itself which at crucial points is processed, and in Lunar Rainbow it is that of a toy piano. The disc closes with the brief Prelude for Angel, composed in 1985 for the animated film Angel’s Egg (Tenshi no tamago) by Mamoru Oshii.

the gorgeous sonorities, bold gestures and ingenious deployment of registers [of Kanno's music] grab your attention...Prelude for Angel proves Kanno's strongest offering. It begins with disarming melodic simplicity, then becomes dark and murky, building up to a shattering climax before returning to its gentle point of origin.