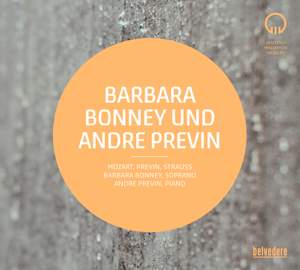 Soprano Barbara Bonney dedicates this evening to lieder by Mozart, Previn and Strauss in a programme that extends from the classical period to the present day.

On this new release from Belvedere, which is a recording from Mozartwoche 2000, Barbary Bonney interprets 'Sallie Chisum remembers Billy the Kid' - which was written for her. In Bonney’s work with André Previn the American art song has become more and more important. In the third part of the Concert she sings Lieder written by Richard Strauss and shows again her attention to detail and her interest in the meaning of the lyrics. Desire is the theme that weaves in various aspects through all three parts of the concert: in Mozart it is the search for his dream, the longing for spring, the desire to be loved. His 'Kleine deutsche Kantate' KV 619 can be heard as an appeal for tolerance and unity. Prévin bases his compositions on contemporary American poetry and with them touches on the wish for recognition as well as for the abolition of inequality between people. Strauss, on the other hand, expresses in his unique colours the search for peace of mind in nature and in a love that is beyond this world. Barbara Bonney, André Previn ad Franz Bartolomey convey all these messages with a fine yet robust artistry. Sheer enjoyment from Salzburg.

Barbara Bonney achieved equal success in art song, oratorio, modern vocal music and opera. Her small but well-projected voice is especially suited to Mozart, the lighter Richard Strauss operas, and all but the heaviest lieder, and she was careful in her choice of repertoire; even in her 40s, she could still call forth a fresh, girlish timbre when it was needed. In 1984, she made her Vienna State Opera debut as Sophie in Richard Strauss's 'Der Rosenkavalier', a role which was to become one of her most famous. Another characteristic role, that of Pamina in Mozart's 'Die Zauberflõte', she first undertook in her 1985 La Scala debut. In 1987, she sang Sophie at Monte Carlo, which brought her to the attention of conductor Carlos Kleiber. Lucia Popp, too, greatly admired her Sophie, and when Popp relinquished the role, moving on to the Marschallin, she declared that she was passing it on to Bonney. Her Met debut was in 1988, as Naiad in Strauss's 'Ariadne auf Naxos'. During the 1990s, increasingly able to pick and choose what roles and repertoire she would sing, she began to reduce her operatic roles to a few of her special favorites, such as Pamina, Susanna and Ilia (in Idomeneo), and adding a few new roles, such as Zdenka in Strauss' 'Arabella' and Hanna Glawari (The Merry Widow]). She is currently Professor at the Mozarteum in Salzburg as well as guest professor at the Royal Academy in London.