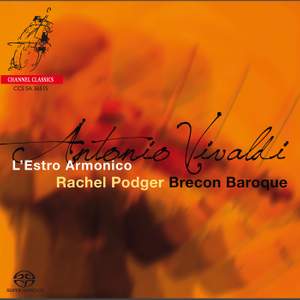 There's a sense of Podger and her players examining and analysing every note in their preparation, deciding on its role, and placing it carefully back into context, without ever disturbing the... — BBC Music Magazine, April 2015, 5 out of 5 stars More…

Vivaldi augmented his reputation as ‘The Red Priest’ with ‘L'Estro Armonico’, Op. 3, a collection of twelve concertos for one, two and four violins. The title of the collection encapsulates the qualities that so entranced Vivaldi’s contemporaries. ‘L’Estro Armonico’, which might be translated as ‘musical rapture’, reflects the vitality and freshness of Vivaldi’s invention: its rhythmic energy, melodic and harmonic intensity, textural sensuousness, performative brilliance and dramatic flair.

“These pieces are truly exhilarating to play and perform and their fresh impact never fails to hit some target or other, judging by the reaction of a live audience. Not often do you witness four violins trying to outdo each other! During Brecon Baroque's concerts preceding the recording, the rapier-like turns in musical conversations between the four parts always seemed to lead to added expectation and excitement – all the more effective because of the contrasted moments of deep melancholy which Vivaldi somehow manages to express irrespective of mode” (Rachel Podger) The dynamic ensemble Brecon Baroque was founded in 2007 by violinist and director Rachel Podger as resident ensemble at her annual Brecon Baroque Festival. The international line-up consists of some of some of the leading lights in the period instrument world. Brecon Baroque specialises in the music of J.S. Bach and his contemporaries, mostly as a one-to-a-part ensemble based on the Cafe Zimmerman ensemble which Bach himself directed. They also appear as a small baroque orchestra for Vivaldi, Telemann, Purcell and Handel.

There's a sense of Podger and her players examining and analysing every note in their preparation, deciding on its role, and placing it carefully back into context, without ever disturbing the forward energy and integrity of the recorded performance...this recording of [the Concertos] outclasses any I've experienced.

Minimalist forces but maximum pleasure from the way in they explore every delicious detail in these 12 concertos, reacting to one another’s playing with freshness and delight that’s constantly engaging. It’s been captured in an excellent recording...I’ll be dipping into that again just for pure pleasure as soon as I can.

There is plenty of detail, but it is natural and never fussy, and ornamentation is always clever, sometimes humorous, often delightful...What really shoots this recording straight to the top of the pile, however, is the sheer joy of it, the spontaneity and the tireless, surging musical energy of its many sudden feints and sallies.

Podger and her Brecon Baroque players make it sound like the easiest thing in the world, dashing off ornaments and runs without a backward glance, and the ensemble (led by Podger from the violin) play as if they were one musician.

[Podger's] Brecon-based players adopt a “chamber” approach to these virtuosic “orchestral” works, which means intimacy in the rapt slow movements and sizzling dash in the allegros. Such originality explains why L’estro was the publication sensation of the first half of the 18th century.

This disproves the accusation that Vivaldi wrote the same concerto hundreds of times: even though strings are the only sonority...the combinations of one, two, and four violin soloists provide endlessly different colours which Brecon Baroque fully exploit...above all the electrifying drive of the famous No 8 leave[s] one breathless with admiration.

You can’t imagine feathers getting ruffled by Rachel Podger’s approach to Vivaldi. Not that it’s remotely boring: as her fingers fly through the concerto 12-pack, L’Estro Armonico, your feet tap and your pulse quickens without the music being pushed to extremes