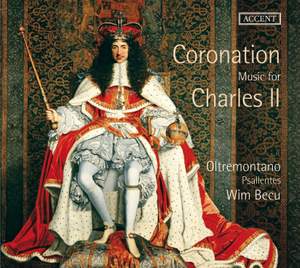 Humfrey: The King shall rejoice

Bassano, A: Galiarda and Coranto a 5 (arr. P. Philips for chamber ensemble)

The coronation of Charles II was the glorious celebration of the restoration of the monarchy following a coup d'ètat, civil war and an 11-year government of the Commonwealth under Oliver Cromwell. The return of the monarch was sealed in early 1660 and the official coronation took place in London just a year later. It was a large-scale political spectacle and a festive patriotic statement. The sequence of the coronation festivities is well documented in texts and pictures, but contemporary statements concerning the music that was played are imprecise. The ensemble Oltremontano under the direction of Wim Becu, specialists in the wind music of the Renaissance and Baroque periods, have evaluated this music and reconstructed the ceremony. They now present the various stations of the ceremonial act in sound: the arrival of the King in London, the triumphal procession to the cathedral, the solemn coronation ceremony in Westminster Abbey, the ensuing royal banquet and the royal masques that followed. The result is a gripping sonic painting - supported by carefully incorporated background noise – that allows us to immerse ourselves in a magnificent event of the early baroque English monarchy.

Locke's five-part suite for the reconstituted royal wind band...it is performed here with nuanced shading and flawless technique...The aromatic tint of Westminster Abbey's bells and library soundscapes...all seem a bit pointless when this album clearly isn't a credible reconstruction of events - but on their own terms these excellent performances are highly enjoyable.

The performances, directed by Wim Becu, are consistently good; there’s some lovely choral singing from Psallentes.