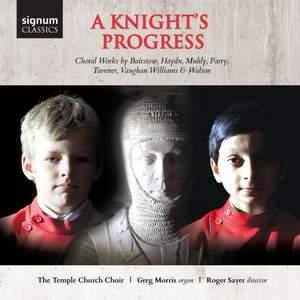 Sensitive interpretations enhance the excellence of the singing throughout this testing programme, which displays a group of choir soloists who never falter. Tavener’s mysticism in music brings... — Choir & Organ, July/August 2015 More…

The Temple Church was built by the Knights Templar. The Round Church was consecrated in 1185 and the Chancel dates from the 1230s. In 1308, the Temple Church contained ‘two pairs of organs’ and, in the vestry, ‘twenty-eight choir copes and four little copes for the choristers.’

700 years later, the Temple Church still resounds to music being made to the glory of God. The Temple Church Choir and the fine Harrison & Harrison organ can also be heard in concert, along with two professional ensembles based at the church: The Temple Singers and The Temple Players. In November 2014 the choir visited Washington DC for the celebration of the Magna Carta Exhibition at the Library of Congress. The choir sang twice at the Library itself, in the presence of HRH The Princess Royal (there in her capacity as Inner Temple’s Royal Bencher), and then in the Supreme Court. Classic FM will broadcast the choir’s concert here on Thursday 21 May 2015 and the choir tour Holland in July 2015, to include a concert in the International Court of Justice.

Sensitive interpretations enhance the excellence of the singing throughout this testing programme, which displays a group of choir soloists who never falter. Tavener’s mysticism in music brings a moment of quiet reflection and the disc ends with Haydn’s joyous Te Deum in C, the choir sounding as if they are also enjoying every minute of it. Highly recommended.