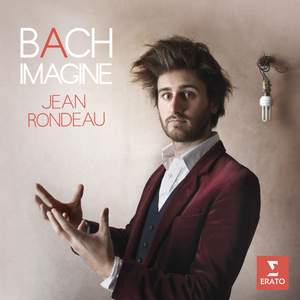 Not only is the trajectory utterly sure-footed; he can also generate palpable excitement without resorting to empty bravado...Rondeau is a natural communicator, unimpeded by the imperative to... — BBC Music Magazine, April 2015, 5 out of 5 stars More…

IMAGINE is the first Warner Classics release from the dynamic young French harpsichordist Jean Rondeau, who sees it as “an exploration of all the possibilities that lie in the music of Johann Sebastian Bach and in the harpsichord”. Praised by radio station France Musique for his “maturity, fabulous touch and originality,” the multi-talented Rondeau feels that, as a young musician today, he has “an incredible opportunity to break out of the concert hall and meet the world”.

Born in 1991, Rondeau is a musician with impeccable credentials in his instrument – and he has many prizes to prove it – but, with his multiple talents and interests, he defies simple categorisation: he is also a musicologist and is trained as an organist and a choral conductor, while as a pianist he is co-founder of a group (called Note Forget – The Project) that performs his jazz compositions.

He feels that, as a young musician today, he has “an incredible opportunity to break out of the concert hall and meet the world”. He has already performed all over Europe and in the United States, is a member of the four-person Baroque ensemble Nevermind, and collaborates regularly with the European Baroque orchestra Les Ambassadeurs. “My aim is to be as genuine as possible in my relationship with the instrument and with the audience,” he says, “I want to share my passion for the harpsichord, and I know lots of young people who are drawn to classical music, so I also try to give it an image that is full of dynamism.”

He was only six years old when he fell in love with the sound of the harpsichord and decided he wanted to learn it. “The harpsichord has a special sound and timbre, and it can really charm an audience. Its possibilities are endless,” he says. His principal teacher was Blandine Verlet, especially renowned in the works of Bach and Couperin, and he went on to study at Paris’ Conservatoire National Supérieur de Musique, at the Sorbonne (where he took a degree in Musicology) and at London’s Guildhall School of Music and Drama.

In 2012, at the age of 21 he was awarded first prize at the prestigious Bruges International Harpischord Competition, where the newspaper La Libre Belgique praised “his ability to make the harpsichord sing and to move the music forward ... a virtuosity that allows him to dash off lightning appoggiaturas, and phrasing that nourishes and refreshes the drama,” summing up his playing as “lively, ardent, captivating and always dynamically charged”. In that same year he also won second prize at the Prague Spring International Harpsichord Competition and received the European Union Baroque Orchestra’s Development Trust Award. In 2013 he was presented the Young Soloist Prize of Francophone Public Radio by the broadcaster France Musique, which singled him out for his “maturity, fabulous touch and originality.”

IMAGINE features one of Bach’s most celebrated harpsichord works, the Italian Concerto BWV 971, but it mainly comprises transcriptions of music that the composer conceived for other instruments: the violin, the lute and the flute. “This isn’t a disc of transcriptions, though,” says Rondeau. “As its name suggests, it is about imagination – an exploration of all the possibilities that lie in the music of Johann Sebastian Bach and in the harpsichord. And though it’s not making a direct link to John Lennon, it’s nice if the title of the CD calls him to mind.”

Not only is the trajectory utterly sure-footed; he can also generate palpable excitement without resorting to empty bravado...Rondeau is a natural communicator, unimpeded by the imperative to score academic points...Make no mistake - this is an auspicious debut.