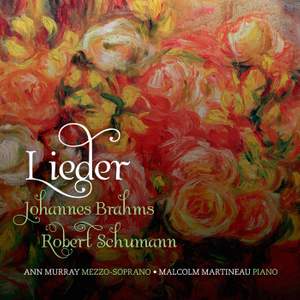 Murray has announced that this wil be her final Lieder recording. If indeed it proves to be so, she will be going out on a high. Her voice is obviously mature, but still in good trim...her artistic... — BBC Music Magazine, June 2015, 4 out of 5 stars More…

Brahms & Schumann: Lieder sees Dame Ann Murray, one of the great vocal artists of the past decades, return to the recording studio to perform a personal selection of Lieder.

Brahms & Schumann: Lieder, Ann’s first solo album in over a decade, will be her final Lieder recording and a fitting way to draw her long and distinguished recording career to a close.

Still a regular fixture on the opera circuit, Ann’s voice remains impressive. Following a Brahms recital at Wigmore Hall earlier this year, The Times stated: ‘Her still-penetrating mezzo was the highlight of the evening. Murray really sings through Brahms’s cantabile lines while losing nothing in theatrical awareness.’

It is difficult to imagine a singer who inspires greater affection and admiration than Ann Murray DBE. With Malcolm Martineau at the piano, this beautifully balanced programme sees Ann perform some of her favourite works by Schumann and Brahms.

Ann Murray performs regularly with the Glyndebourne Festival, English National Opera, the Royal Opera and the Metropolitan Opera, New York and has been a regular guest at the BBC Proms.

A founding member of Graham Johnson’s organization, The Songmaker’s Almanac and a Jury member for the BBC Cardiff Singer of the World 2009 and Song Prize, Ann Murray is a lover of song and has been acclaimed worldwide for her own performances.

In the 2002 Golden Jubilee Queen's Birthday Honours Murray was appointed an honorary Dame Commander of the Most Excellent Order of the British Empire. She is an Honorary Doctor of Music at the National University of Ireland and an Honorary Fellow of the Royal Academy of Music.

Murray has announced that this wil be her final Lieder recording. If indeed it proves to be so, she will be going out on a high. Her voice is obviously mature, but still in good trim...her artistic intelligence and commitment are as apparent as her skilful balance between words and notes...[Martineau] accompanies with his usual expertise and authority

Murray has the art of increasing the tension without raising the volume...And given every encouragement by Malcolm Martineau's deft pianism, she brings a coquettish charm, without winsomeness, to the song of the flighty actress Philine, first cousin to Strauss's Zerbinetta.