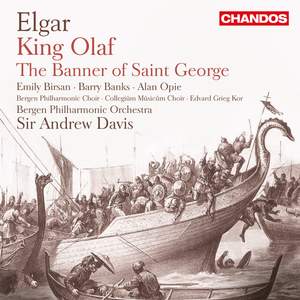 there's nothing stilted about Elgar's music: it crackles with confident vitality...the Norwegian choruses respond with crisp vigour and superb English diction, only faintly (and appropriately)... — BBC Music Magazine, April 2015, 5 out of 5 stars More…

Elgar: Scenes from the Saga of King Olaf

Introduction: There Is a Wondrous Book (Chorus, Bass, Soprano, Tenor)

The Challenge of Thor (Chorus)

The Conversion: Behold Me, My People (Tenor, Bass, Chorus)

The Conversion: As Leaps the Lights of Winter (Chorus, Bass)

The Conversion: Then o'er the Blood-stained Hog-stone (Chorus, Tenor)

Recitative: How the Wraith of Odin Old (Bass)

The Wraith of Odin (Chorus)

Recitative: Hark! She Flies From Wendland Forth (Bass)

The Death of Olaf (Chorus)

Epilogue: In the Convent of Drontheim (Chorus)

Scene 1: Within Sylene's walls no sound is heard

Scene 1: The women of Sylene rend their hair

Scene 1: Forth from the palace, beautiful as day

Scene 2: Without a fear beside the dragon's tarn

Epilogue: It comes from the misty ages

James listens to Edward Elgar's relatively little-known cantata, based on Longfellow's poem about Olaf, the first Christian king of Norway.

After having recorded Elgar’s The Dream of Gerontius (‘Recording of the Month’ in BBC Music), Sir Andrew Davis now turns to two of the composer’s most popular early choral works: Scenes from the Saga of King Olaf and The Banner of Saint George. The recording was made soon after a successful performance, featuring the same ‘excellent Bergen Philharmonic’ and ‘outstanding’ vocal forces: the ‘imposing’ baritone Alan Opie, the ‘high, incisive tenor’ Barry Banks, singing ‘fearlessly in some quite challenging passages’, and the American soprano Emily Birsan, who sang ‘with radiant delicacy’ (The Daily Telegraph).

Dating from his years of ‘apprenticeship’, the two works shaped Elgar’s reputation as a leading orchestrator and most popular British composer of his time. The secular cantata Scenes from the Saga of King Olaf derives from Longfellow’s epic poem about Olaf Tryggvason, who became King of Norway in 995. While the text was heavily adapted and augmented, the use of sophisticated compositional techniques, such as extensive motivic work, resulted in music of great power and solemnity.

The ballad The Banner of Saint George is based on the story of Saint George of Cappadocia, as related by the Bristol poet Shapcott Wensley. It was commissioned by Britain’s leading publisher, Novello, and composed in only one month in 1896. Elgar overcame the prescriptive nature of the words and produced a work of lasting charm, the music rising above the material to create atmosphere, momentum, and colour.

It is good to have such a fine and experienced Elgarian as Andrew Davis to conduct this performance with the benefit of hindsight, as it were, recognising Elgar's emergent greatness from long experience of where it was to lead him. Davis can fasten upon the glimpses of genius and relish them, while also understanding what there is of value when Elgar is still resting upon the more conventional manner out of which he was formed.

What a nice idea it was to have a Norwegian choir and orchestra performing English music about a Norse hero...The combined Norwegian choirs sing very well indeed in both works…[and] the Bergen Philharmonic plays with verve and distinction. Sir Andrew Davis…is just the man for these assignments.

I suppose it's appropriate that this Norse legend should be recorded by the Bergen Philharmonic, and under the expert guidance of ardent Elgarian Andrew Davis, they and the combined Norwegian choirs seem effortlessly at home with Elgar's music...if you're a fan of Elgar but haven't yet explored some of the choral works that are somewhat off the beaten track, then this is an ideal disc, with enthusiastically engaging performances from everyone.

King Olaf is a folk-tale narrative about the Norwegian Olaf Tryggvason, in the tradition of Mahler’s Das Klagende Lied or Schoenberg’s Gurrelieder, and it is splendidly performed by Davis’s Bergen forces. The soloists, Emily Birsan, Barry Banks and Alan Opie, all make positive contributions.

King Olaf has been recorded in full once before, in the 1980s...Fine though that version is, Davis’s is better: it has a dramatic sweep and concern for detail that you don’t get from Handley. The Bergen orchestra and choir play and sing Elgar as though it were part of their regular repertoire, while the soloists...all cope well with what is sometimes strenuous vocal writing.

The Bergen orchestra plays with a keen ear for colour and dramatic flux, and the chorus...makes the narrative live and breathe in suppleness, expressive sensitivity and lusty power...three fine soloists...carry the story with great distinction, subtlety and immediacy of impact.