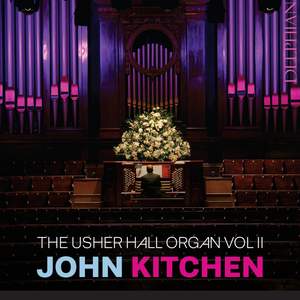 Kitchen despatches each and all with performances that blend aesthetic nuance with bravura showmanship…Delphian’s vivid record sound adds to the considerable pleasure. — Choir & Organ, June 2015 More…

MacCunn: Land of the Mountain and the Flood Overture, Op. 3 (Arr. J. Cull)

Sherman Myers: Johnny on the Spot

The Usher Hall’s monumental organ celebrated its 100th birthday this year. Delphian artist and Edinburgh City Organist John Kitchen has established a hugely popular series of concerts at the Hall, and draws on its repertoire to follow up his 2004 recording of the then newly restored instrument with a programme that further represents the vast variety of music that draws in the Edinburgh crowds. Opening with an evocative new work by Cecilia McDowall, the first part of the programme resounds with the theme of bells (including the instrument’s extraordinary carillon). Jeremy Cull’s compelling transcription of Hamish MacCunn’s 'The Land of the Mountain and the Flood' displays all of Kitchen’s virtuosic aplomb, while the Dance Variations on ‘Rudolph the red-nosed reindeer’ are a much delighted-in annual request. A recital of this nature wouldn’t be complete without a major piece of Bach, here dispatched with appropriately Edwardian swagger. Until August 2014, John Kitchen was a Senior Lecturer in Music at the University of Edinburgh, where he continues as University Organist and conductor of the Edinburgh University Singers; he is also Director of Music at Old Saint Paul’s Church. Following the restoration of the Usher Hall organ in 2003, John was appointed Edinburgh City Organist with promotional and curatorial duties, a post he still holds. He gives many solo recitals both in the UK and further afield, and also plays regularly with several ensembles, covering a wide range of musical styles. In addition, he is much in demand as a continuo player, accompanist, lecturer, examiner, adjudicator, writer and reviewer. John has recorded extensively for Delphian, most recently on the world-famous Taskin harpsichord (1769) for the disc Music in the Age of Louis XV (DCD34112).

Kitchen despatches each and all with performances that blend aesthetic nuance with bravura showmanship…Delphian’s vivid record sound adds to the considerable pleasure.

this is a superb recital that explores a wide-range of music. Kitchen has presented a number of new works — possibly to become new favourites? — and some well-established masterpieces. He brings huge flair, understanding, characteristic humour and an intimate knowledge of organ registration and repertoire to this disc.

Bell sounds abound in this well chosen programme … “Custodian” organist, John Kitchen, misses no tricks, even the ubiquitous Widor seems not at all out of place with the preceding proceedings. The Passacaglia is a real treat, played in veritable Edwardian English style (not so widely approved of since the 1960’s). Encore!

Kitchen has established himself, through his wildly eclectic programming, as a latter-day WT Best. The tracklist of his latest solo disc swings fearlessly between the vintage integrity of Bach’s epic Passacaglia and Fugue... to a lighter extreme...If some of that sounds a tad cheesy, be assured, Kitchen never sinks beneath the bounds of good taste.

There is a great deal of fun to be had, together with testimony to the fact that Kitchen has a multifaceted talent to go with his sense of humour...[the Widor and Bach] reveal a striking virtuosity coupled with consummate control of the organ’s palette of colour.