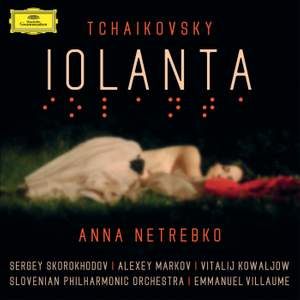 Netrebko sounds radiant, if improbably imperious as the young, blind princess, who magically finds love and sight in the arms of the smitten Count Vaudémont, sung by rousing tenor Sergey Skorokhodov.... — Financial Times, 17th January 2015, 4 out of 5 stars More…

Tchaikovsky: Iolanta Op.69 / 4. Scene And Arioso Of The King

Tchaikovsky: Iolanta Op.69 / 7. Scene And Duet Of Iolanta And Vaudémont

Following Anna Netrebko's astounding success in Salzburg's Il Trovatore production we are pleased to announce a very exciting opera release for the start of 2015, recorded during her U-Live tour in 2012.

Anna Netrebko performs Iolanta, the title role of one of Tchaikovsky’s most passionate, evocative scores and one of opera’s most enigmatic figures making the character her own and dedicating herself to championing this under-appreciated work.

The hand-picked company of supporting artists makes this a significant addition to Netrebko’s discography and an artistically valuable addition to the DG catalogue.

Netrebko is scheduled for eight staged performances of Iolanta at the Metropolitan Opera in New York in January-February 2015, as well as a four-city U-Live produced European tour of concert performances and a Royal Albert Hall date later in the season.

[Netrebko] has never been better than here, where her head and heart are so self-evidently engaged. Her opening ariosa establishes the glorious complexion of her voice - a creamy, dark coloration extending unblemished throughout the range...The refinement of Villaume's conducting is a constant source of delight: it nuances and tempers even the most wholehearted flights of fancy.

Netrebko sounded gloriously comfortable in her native language and pouring out a stream of gold-shot-with-silver sound even throughout the range. I doubt if the role has been sung better in living memory.

Netrebko’s at her absolute best in this role, which really plays to her strengths. Much of the music lies in the voluptuous middle of her voice and she never sounds pushed or over-parted...Her colleagues are no less impressive, particularly the steely-voiced tenor Sergey Skorokhodov who sings with tireless ardour and real poetry as her lover Vaudemont and Vitalij Kowaljow as her tormented father.

Tchaikovsky’s score is one of his most effusive lyrical outpourings, with passages of heart-stopping beauty. Netrebko, singing in her own language, is unsurpassable in this music. Her lyric soprano voice is at its peachiest, opening out thrillingly for ecstatic climactic high notes. Her Vaudemon(t) is Sergei Skorokhodov, the finest new Russian tenor since Galuzin. I’ll be surprised if any opera recording surpasses this in 2015.

[Netrebko’s] commitment is never in doubt, nor her artistry. Her deployment of unearthly, veiled tones in the opening scenes suggest a waif-like figure troubled by emotions she can barely comprehend. Later, as light enters Iolanta’s life for the first time, her terror and rapture are quite shockingly vivid.

Tchaikovsky might have written the role of Iolanta...with Anna Netrebko in mind, so perfectly does it suit her impulsive musical style and heart-on-sleeve warmth of personality...Villaume’s forthright conducting and the ardent Slovenian Philharmonic Orchestra bring things to boiling point.

the Slovenian Philharmonic delivers impressive wind sonorities in a score packed with striking instrumental details...Netrebko never once disappoints. She sings in Russian, and there’s music just in the milky way she pronounces a word like lyubimuyu (favourite)...Skorokhodov’s Vaudémont is the ardent lover personified.

Tchaikovsky’s last opera is a flawed piece capable of reaching realms of longing romanticism others cannot...Netrebko is on a crusade to make it better known in the West...The other singers are pretty good – the lyrical Vitalij Kowalyow as René, Lucas Meachem a velvety Ibn Hakia, Sergey Skorokhodov’s beautifully smooth, masculine tenor Vaudémont full of romantic ardour.