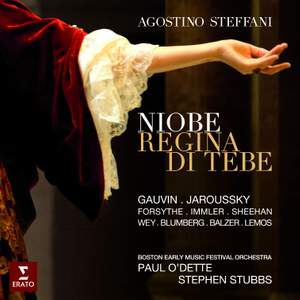 it is a scrupulously detailed, slow-burning performance with an outstanding viol consort...The supporting roles are strongly cast...Jaroussky is at his best in music of penetrating sweetness... — BBC Music Magazine, March 2015, 4 out of 5 stars More…

Agostino Steffani’s sumptuous 1688 opera Niobe, Regina di Tebe has proved a revelation to audiences since its first modern production in 2008. The spellbinding French countertenor Philippe Jaroussky, who appeared in its US premiere at the Boston Early Music Festival in 2011, stars in this new recording, with Canadian soprano Karina Gauvin in the title role of the proud, but tragic Theban queen.

Niobe, Regina di Tebe by Agostino Steffani (1654-1728) has proved a revelation to audiences since its rediscovery and its first modern production, staged in 2008 at Germany’s Schwetzingen Festival. Its sumptuous, expressive music has also attracted such virtuoso singers as countertenor Philippe Jaroussky – who describes it as “a beautiful bridge between Monteverdi and Handel” – and soprano Karina Gauvin, the two stars of this new recording, made in Autumn 2013 in collaboration with the Boston Early Music Festival and Radio Bremen.

Jaroussky, taking the role of King Anfione of Thebes, appeared in the first US performances of Niobe in Boston in 2011, prompting the New York Times to say that: “[in a] finely balanced cast ... the clear standout was the countertenor Philippe Jaroussky, who sang powerfully and sweetly and created a nuanced portrayal.” As the Boston Globe observed later in the year, “His voice combines a limpid purity of timbre, a weightless agility, and an elegant control of nuance that allows him to shade a single phrase with a multitude of colors.”

When Niobe, first seen in 1688, was staged at London’s Royal Opera House in 2010, The Independent enticingly summarised the work and its appeal: “Lust, ambition and grief are expressed extravagantly yet succinctly ... The arias are brilliant and abundant, propelled by athletic ground basses, interrupted by prowling kettle-drums, or sinuously laced with viola da gamba ... Composer, diplomat and theologian, Steffani knew how to tickle the interest of his audience, spiking Niobe's maternal hubris with adultery, magic spells, political intrigue, romantic sub-plots and the stock sardonic nurse who is there to comment on human folly. The opera was premiered in Munich's carnival season, and it shows. So do the diverse musical influences in Steffani's life: the stile antico training of his boyhood, an early baptism in Venetian opera, and a pivotal journey to Lully's Paris.”

Based on the Metamorphoses of Ovid, the opera offers a dramatic and tragic climax: punishing Queen Niobe for her disrespectful display of pride, the gods kill her 14 children. Such is her grief that she turns to stone, while her husband, King Anfione kills himself. As Opera Today wrote after Jaroussky’s performance in Boston in 2011: “Jaroussky sang all this movingly in his pure countertenor, none the less exciting for his prevailing calm. His style of ornament hewed scrupulously to the earlier, French style rather than the rapid divisions he performs in Handel’s operas, lingering to express ‘tormenti’, weeping his ‘pianti’, and at last (having stabbed himself) dying on a delicious fading melisma.”

“What I like about my character, Anfione, is that he is a King who would like to give up his power and just compose music,” explains Jaroussky. “He’s a little bit like Orfeo. In the middle of the opera, just by singing he magically builds new walls to defend his city ... His music is particularly beautiful. Niobe is a huge, challenging work, and it has me singing through my entire range. It’s in a very special style: very virtuosic and very touching. Steffani was a very original composer who helped to advance the style between the periods of Monteverdi and Handel. Sometimes his music sounds like Cavalli, sometimes like the young Handel – it’s very inspiring.”

In addition to Karina Gauvin – especially celebrated in Handel and praised by The Sunday Times for “her glinting soprano, bright-edged yet deliciously rounded and sensual ... used with rare understanding for character” – the cast includes the American soprano Amanda Forsythe as the young priestess Manto (she in fact sang the role of Niobe in Boston in 2011) and the Swiss tenor Terry Wey as the Thessalonian prince Creonte. Sharing the musical direction are Paul O’Dette and Stephen Stubbs, co-directors of the Boston Early Music Festival. “Our discovery of this unknown masterpiece has been very exciting,” says O’Dette. “Niobe is an extraordinary piece – with breathtaking music and intense drama.”

it is a scrupulously detailed, slow-burning performance with an outstanding viol consort...The supporting roles are strongly cast...Jaroussky is at his best in music of penetrating sweetness and curdles under pressure. The laurels go to Gauvin, whose magnificent, creamy soprano ignites in the fury and anguish of Act III.

Jaroussky sounds in his elements when Anfione ensconces himself in his Palace of Harmony...Gauvin captures not only Niobe's haughty pride and capricious cruelty but also her sensuality, folly and gullibility...The performance is never forced but always emotive...An exemplary testament of superb musicianship from all participants...this is a landmark event in Steffani's much-deserved rehabilitation.

Gauvin’s flinty soprano is ideal for her role, and while Jaroussky’s boyish tones never sound heroic, he is an expressive, musical artist who makes something special of Amphion’s laments. The supporting cast are stylists, and Steffani’s music — hovering somewhere between Alessandro Scarlatti and Lully — repays repeated listening.

as a crafter of spellbinding moments this composer...fully deserves a place in history...Steffani’s a true 17th-century European, blending influences from France, Italy and Germany. It’s a very potent mix. And his instrumentation is gorgeously multicoloured...there’s never a doubt over Jaroussky’s sweet arabesques, or the prideful throbbing of Gauvin’s Niobe.