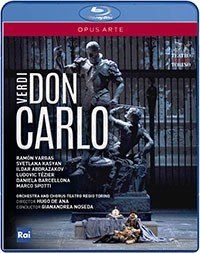 The most distinguished performances come from Svetlana Kasyan as Elisabetta, fine in appearance and with a command of the grand line; and Ilda Abdrazakov, an unusually warm portrayal of a torn... — BBC Music Magazine, April 2015, 2 out of 5 stars More…

Teatro Regio's 2013 revival of their highly successful 2006 production of Verdi's Don Carlo celebrates the 40th Anniversary of the theatre's reopening in 1973. With traditional staging and lavish costume design, the production garnered high acclaim in the national and international press, with GB opera commending the 'sumptious' setting and French online music magazine ResMusica praising director Hugo de Ana's decision to revive the show 'in all its splendour'. Shown here in the four-act version, Don Carlo is the fascinating tale of father-son power struggles, adultery and love that borders on incest. The cast - under the powerful baton of Gianandrea Noseda - is headed by renowned Mexican tenor Ramon Vargas, and also features Ludovic Tezier, who has been hailed as 'one of the best Verdian singers of our time' (ResMusica).

Staged to mark the 40th anniversary of the rebuilding of the Teatro Regio.

The most distinguished performances come from Svetlana Kasyan as Elisabetta, fine in appearance and with a command of the grand line; and Ilda Abdrazakov, an unusually warm portrayal of a torn but ruthless ruler.

The cast’s low-voiced men fare the best. Although his voice is on the light side, Ildar Abdrazakov is a fine, articulate Philip who shapes phrases musically. Even better is Ludovic Tézier’s urbane, powerfully resonant Posa—not an especially sympathetic one, but a rock of support for the troubled Carlo. Marco Spotti brings vocal polish rather than old age to the Grand Inquisitor, and Roberto Tagliavini does well as the Monk. Ramón Vargas’s voice sounds unusually dry here and his high notes are a bit squeezed, but Vargas is an accomplished stylist and gives convincing vent to Carlo’s distress.

Gianandrea Noseda’s conducting is excellent, combining large-scale grandeur with finesse, and the orchestra and chorus are world class. Ramón Vargas’s protagonist is elegantly voiced, supply phrased and with admirable heft for his outbursts...If you are looking for a well sung and traditional performance then this will appeal.