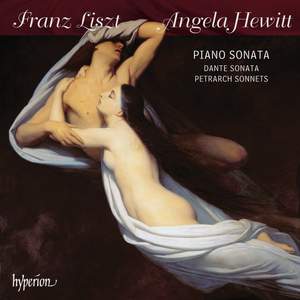 Hewitt allows [the Sonata's] huge single-movement span to unfold with a sense of space and a purposeful clarity - qualities akin to the manner of Beethoven's late sonatas...Hewitt, a hugely experienced... — BBC Music Magazine, April 2015, 3 out of 5 stars/4 out of 5 stars More…

Angela Hewitt’s notes for this important new album describe a teenager’s moment of revelation when she first came to appreciate the epic masterpiece that is the Liszt Piano Sonata. Here we have a heart-felt recording where this palpable sense of wonder is manifest alongside Hewitt’s enthralling technical facility at the keyboard.

The programme is completed by the second half of Liszt’s dazzling second Année de pèlerinage collection: the three Petrarch Sonnets and the noble Dante Sonata, the latter composed as a fund-raiser for the Bonn Beethoven monument in 1839.

Hewitt allows [the Sonata's] huge single-movement span to unfold with a sense of space and a purposeful clarity - qualities akin to the manner of Beethoven's late sonatas...Hewitt, a hugely experienced Bach-performer, delivers [the Allegro] at an unexaggerated pace, and with a precisely articulated vividness that works superbly.

What enviable poise and expressive beauty to launch the central Andante...Hewitt holds her own to such an extent that she makes you forget all about odious comparisons and listen instead to one of the great milestones in all music...This is possibly the very finest of Angela Hewitt's many recordings.

Hewitt’s Liszt interpretations are both exquisite and dramatic, at once finely thought-out and exalting. From the first bar, the Sonata is invested with a freshness...Wise long pauses are left between items, time in which to forget every music you ever knew.

Hewitt has a refreshing attitude to Liszt...Virtuosity is only the start [of the Dante Sonata]. Here, in the B minor sonata and in the three youthful Petrarch Sonnets, Hewitt is magisterial. For many years Bach has been her calling card. Her Liszt is, if anything, yet more compelling.

She recognises that the sonata is a work of emotional extremes, but of extremes that are close-knit and have a clear expressive focus...Hewitt’s interpretation scores over those that veer from one dramatic incident to another without paying due attention to the shaping of the quieter moments of bliss and repose.

Elegant and immaculate in both musicianship and platform wardrobe, the pianist Angela Hewitt doesn’t immediately rush to mind when considering the wild music of Liszt...Even if her approach sometimes rubs against the music’s grain, the poise and clarity of her textures and phrasings still brings major pleasures.