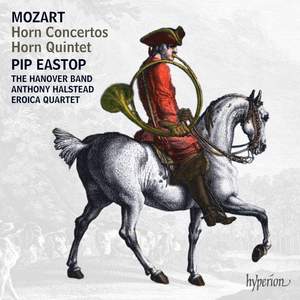 The Hanover Band, with the Eroica Quartet, Anthony Halstead

Even those who know these concertos quite well will find much to surprise here...Not least, where most players of the natural horn seek to minimise the difference in tone of those pitches that... — BBC Music Magazine, March 2015, 4 out of 5 stars More…

Mozart’s Horn Concertos are perhaps the most popular works ever written for the instrument. This new album is a collection of all the works Mozart wrote for his lifelong friend, the horn player Joseph Leutgeb (1732–1811), one of the foremost players of his day.

In these five works Mozart captures the public persona of an instrument most readily associated with all things hunting, but he also brings it indoors: lyrical episodes, and especially the slow movements, show the very soul of the instrument, despite any perceived limitations of the valveless horn. Leutgeb must indeed have been a worthy recipient of these fine works.

His modern successor is natural horn player Pip Eastop, whose technical ability and musical inventiveness are palpable in these hugely enjoyable renditions. He is accompanied by The Hanover Band and Tony Halstead (who has also provided an ending for the unfinished K417, Horn Concerto No 2 in E flat major).

Even those who know these concertos quite well will find much to surprise here...Not least, where most players of the natural horn seek to minimise the difference in tone of those pitches that can only be got out of the instrument by hand-stopping and tricks of breathing, Pip Eastop positively flaunts them...Crisp playing by The Hanover Band under Halstead.

Pip Eastop plays on a modern copy of an 1830 natural horn with an astonishing variety of noises at his command.

you would to go a long way to hear such a refined legato line as Eastop achieves. With lucid input from The Hanover Band and from the Eroica Quartet in the Quintet, these performances have a musical integrity over and above historical interest.