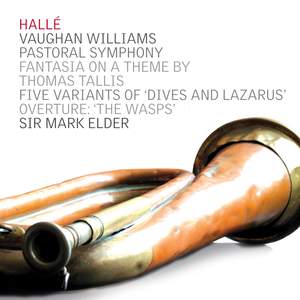 [the Tallis Fantasia] is tight-reined, yet also singing and surging with no trace of anti-Romantic tendentiousness...But what makes this release so special is Elder and the Hallé's interpretation... — BBC Music Magazine, January 2015, 5 out of 5 stars More…

Two of Vaughan Williams’ most popular works, Wasps Overture and Tallis Fantasia, are coupled with arguably his greatest and most original Symphony and a delightful multiple setting of a folk-song which enchanted the composer throughout his life.

The Wasps Overture has become one of the composer’s most popular works. From the opening orchestral buzzing of a swarm of wasps, it emerges as one of English music’s great tunes, this work is a showcase for the vivid orchestral colours of Vaughan Williams’ writing, presented here to the height of effect by the acclaimed musicians of the Hallé.

Fantasia on a Theme by Thomas Tallis is one of Vaughan Williams’s most frequently played works and is acknowledged as one of the greatest examples of writing for strings. Although the treatment of Tallis’s theme is mainly contemplative, there are dramatic and passionate moments in the Fantasia, which is scored for two string orchestras (the second orchestra comprising only nine players) with solo quartet.

The ‘Pastoral’ Symphony is characterized with a mood which is gently elegiac and dark, and which reflects the work’s true genesis. Although the title mistakenly led audiences and critics to associate the work entirely with rural landscapes and English folksong, it is in fact directly related to the First World War of 1914‑18. Vaughan Williams, although forty‑one when war was declared, enlisted as a private in the Royal Army Medical Corps and served as a wagon orderly in France.

Five Variants of ‘Dives and Lazarus’, for strings and harps was written for the New York World Fair in 1939, when Sir Adrian Boult conducted the first performance in Carnegie Hall. Vaughan Williams first encountered the folksong Dives and Lazarus in 1893, when he was 21, later collecting several versions, and in this mature work he displays his affection for the melody in variants which are not exact replicas but reminiscences of various versions in several folksong collections, including his own.

[the Tallis Fantasia] is tight-reined, yet also singing and surging with no trace of anti-Romantic tendentiousness...But what makes this release so special is Elder and the Hallé's interpretation of the Pastoral Symphony...Elder's telling way with the music's pacing...articulates the whole design with a vividness that allows an element of genuine dramatic sweep to come through.

Elder and the Hallé Orchestra play the symphony from the heart and the music soars...A glowing performance of the much-loved “Fantasia on a Theme by Thomas Tallis” also raises the spirits.

the finest volume yet in Sir Mark Elder's unfolding Vaughan Williams cycle...Abetted by uncommonly articulate orchestral playing, the performance of the Pastoral Symphony evinces a glowing dedication, remarkable luminosity of texture, songful rapture and emotional clout that mark it out as a front-runner...A marvellous disc.

It is still a revelation to find how much Sir Mark Elder draws from well-loved and oft-performed scores…[the Pastoral Symphony is a] wonderfully perceptive performance.

Performances that rival even the classic Boult recordings...Elder’s interpretation vividly highlights the troubled undercurrents of the Pastoral Symphony.

The troubled, sullied world that the music explores is recreated by Elder and the Hallé without ever becoming overwrought or maudlin, and bringing out unexpected resonances along the way.

Elder and his inspirational Mancunians continue their own-label RVW cycle with a rapt account of the third symphony, its sombre reflection of a world torn apart by war here winning in its eloquent simplicity.