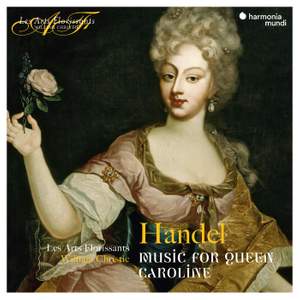 Handel: Coronation Anthem No. 3, HWV260 'The King Shall Rejoice'

I. The King Shall Rejoice

II. Exceeding Glad Shall He Be

III. Glory And Worship Hast Thou Laid Upon Him

I. We Praise thee, O God

II. The glorious Company of the Apostles

III. When thou tookest upom thee

IV. Day by day we magnify you

VI. O Lord in thee I have trusted

Handel: The Ways of Zion Do Mourn "Funeral Anthem for Queen Caroline", HWV 264

II. The ways of Zion do mourn

III. How are the mighty fall n

IV. She put on righteousness

V. When The Ear Heard Her

VII. She Deliver’d The Poor That Cried

IX. The Righteous Shall Be Had

X. Their Bodies Are Buried In Peace

XI. The People Will Tell Of Their Wisdom

XII. They Shall Receive A Glorious Kingdom

XIII. The Merciful Goodness Of The Lord

Caroline of Ansbach, [actually Wilhelmina Charlotte Caroline von Brandenburg-Ansbach] wife of King George II, remarkably beautiful patron of the arts and sciences, considered Handel an esteemed confidant. It was in Hanover that Caroline first encountered Handel, actively encouraging his appointment as Kapellmeister there in 1710, and it was apparently at her behest that he composed five of his Italian chamber duets. With the accession of the elector as George I in 1714, Caroline became Princess of Wales and on his death, in 1727, Queen of Great Britain and Ireland, consort of King George II. Three inspired works by the composer, including the magnificent Funeral Anthem, testify to the astonishing friendship between this monarch and artist. The latter was entrusted with the solemn music composed for the grand ceremonies that marked the reign: 'The King shall rejoice', given for the King’s coronation, the 'Queen Caroline' Te Deum written for her own ascension to the throne, and 'The Ways of Zion do mourn' performed at her funeral in 1737. When she died unexpectedly at the age of 54 her passing was much lamented. Quipped one irreverent wit, “O Death, where is thy sting / To take the Queen and leave the King?” This recording brings together, for the first time, three works underlining the strong link between the monarch and his favourite composer.

The vocal and instrumental ensemble Les Arts Florissants is one of the most renowned and respected early music groups in the world. Dedicated to the performance of baroque music on original instruments, the ensemble was founded in 1979 by the Franco-American harpsichordist and conductor William Christiewho directs it to this day, and takes its name from a short opera by Marc-Antoine Charpentier. Les Arts Florissants played a pioneering role in the resurgence of interest in the French musical world for a repertoire which had up until then been neglected (in particular unearthing many treasures from the collections of the Bibliothèque Nationale de France) but which is now widely performed and admired: not only 17th century French repertoire but also European music of the 17th and 18th centuries.

The instrumental performance under William Christie is skilfully coloured

The choir and orchestra of William Christie’s Les Arts Florissants provide elegantly demure performances, which shy away from the panache exhibited by some rivals.

sublime slow music is sonorously satisfying and builds with emotional conviction. Gently lilting strings and the full choir's blossoming sonorities underline the eloquence of Caroline's virtues...[Christie's] judgement of the melancholic coda for strings that concludes the anthem...is profoundly beautiful.

Christie calibrates his performance perfectly – bringing swift movement to Handel’s rapidly set verses…but allowing plenty of spacious swagger and grandeur in the big choruses supported by trumpets...This is an ideal recording for those of us looking for a change from the enthusiastically full-throated and highly articulated Handel singing we get from many British choirs … fit for a queen.

the instrumental colour is marvellous, simultaneously rich and transparent, and the singing of the chorus is joyful and exciting … This deserves to do well.

Christie is mainly associated with the revival of the French baroque, but he is a Handelian second to none. He revels here in the pomp and circumstance of one of George II’s (and Caroline’s) coronation anthems, The King shall rejoice, and the “Caroline” Te Deum.

It’s a thoughtfully conceived and immaculately presented sequence, wonderfully paced by William Christie and by turns exultant and lamenting, with superb solo singing by countertenor Tim Mead in the Te Deum.

Christie delights in the buoyant Handelian choral and orchestral splendour of the coronation anthem, and judges well the combination of mourning and celebration in the funeral anthem — the solos in She deliver’d the poor are as affecting as you’re likely to hear.