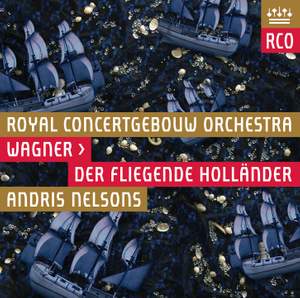 The Wagner year 2013 brought something special to the Royal Concertgebouw Orchestra's concert schedule. The RCO pulled out all the stops with a full performance of this Wagner opera in concert version. Busy carving out an impressive career for himself and making his fifth appearance at Bayreuth last summer, Andris Nelsons has certainly earned his spurs as a Wagner specialist. He is led the RCO and a cast of international soloists in 'Der fliegende Holländer', an opera about the captain of an infamous Dutch ghost ship who can be freed only by a woman who consents to marry him.

The conductor and his orchestra are exciting throughout … there’s always time and (musical) balance for the provate moments in a basically swift traversal of the score … Stensvold’s enunciation of the role through the text is both moving and understanding … Fine recording. Hugely recommended.

Every semi-quaver is beautifully articulated and precisely enunciated, but there is a long-breathed grandeur to the sound that positively glows in the resonant acoustic.

this tempestuous performance would be worth having for chorus and orchestra alone, but it has strong soloists too: Terje Stensvold, warm and only too chillingly persuasive in the title role; Anja Kampe an urgent, obsessed Senta...There’s no shortage of great recordings out there, but if the excitement and risk of live performance appeals, this is a must.

Ventris is an ardent yet sensitively attuned Erik and Russell Thomas a fresh voiced, agile Steersman. Anja Kampe provides one of the best Sentas on disc … there’s a welcome fullness and firmness to her tone at all levels of pitch and dynamic, together with a sense of identification with the character’s obsessiveness … a well performed account of Wagner’s Hollander