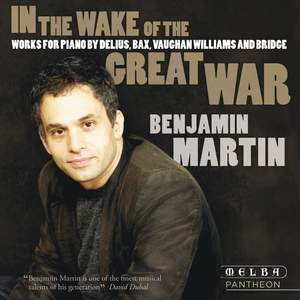 In the Wake of the Great War: Benjamin Martin

All the pieces were written in the years 1921-1930 - ‘In the Wake of the Great War’. As Michael Quinn remarks in his liner notes: “It is tempting to hear the works featured on this disc as responses to the palpable sense of entropy then enveloping Britain whose great news had been robbed by the Great War.” Two lengthy sonatas, by Arnold Bax and Frank Bridge, are interleaved with the three Preludes of Frederick Delius and Ralph Vaughan Williams’ ‘Hymn-tune Prelude on Song 13 by Orlando Gibbons’.

Also included is the world premiere recording of Benjamin Martin’s arrangement of Charlie Chaplin’s ‘Smile’ from his ‘silent’ 1936 film ‘Modern Times’, the last outing on screen of his indomitable Tramp character, and Chaplin’s reaction to the revolutionary social and economic changes that had occurred since the end of the First World War.

The repertoire is an example of Martin’s insightful and imaginative programming which regularly draws comment from international commentators (“A distinctive choice...the pieces were cast in an arresting pan-modernist style” - New York Times).