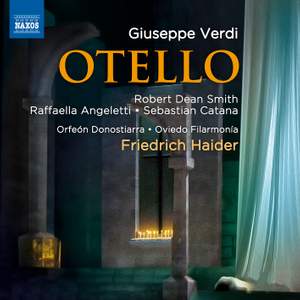 After the success of Aida in December 1871, and despite his enormous popularity, Verdi retired as an operatic composer. It took the young publisher Giulio Ricordi and composer and librettist Arrigo Boito a number of years to entice him to embark on what was originally called Jago, and only later known as Otello. Verdi retained a reverence for Shakespeare, and had already composed Macbeth. With Otello, completed in November 1886, and triumphantly received, he created a masterpiece from a play that, as Bernard Shaw noted, had all the ingredients of an Italian opera.

Otello emerged after many years of silence from Verdi, who had retired from operatic composition a number of years before. It has been recorded many times and is in the top 25 operas performed around the world, and is sung by the world’s leading singers and ensembles. Naxos has a historic recording of Otello available and it has been included in excerpted form, but not complete and newly recorded, as here.