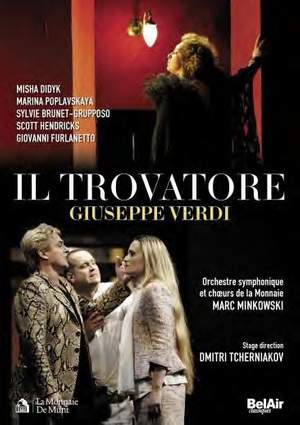 After the success of 'Rigoletto', Verdi called on librettist Salvadore Cammarano in 1851 for his new opera 'Il Trovatore', based on the eponymous play by Spanish playwright Antonio García Gutiérrez. Verdi takes us to 15th century northern Spain to witness the tragic destiny of those under the control of the gypsy Azucena, who seeks to avenge the death of his mother.

The first percussion notes are solemn, setting the tone for Verdi’s masterpiece, whose main themes include abandonment, passion, power, love for one’s parents and vengeance. The music is sometimes tender and sensuous, with exceptional energy and force, revealing daring and mastery in its musical and vocal language.

This production marked a double first: the debut of Russian stage director Dmitri Tcherniakov at La Monnaie and the first Verdi interpretation by Marc Minkowski.