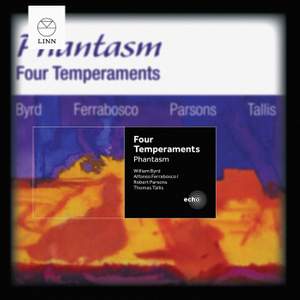 Tallis: In nomine II a 4

Ferrabosco, A I: Fantasia a 4

Ferrabosco, A I: Sur la Rosée (Fantasia a 6)

The exceptional viol quartet Phantasm, whose debut won a Gramophone Award, returns with an equally ravishing recording of the repertoire in which they excel, from the golden age of Elizabethan England.

Originally released on Avie, ‘Four Temperaments’ has been re-issued as part of Linn’s ECHO series which offers a second chance to enjoy the best recordings from Linn artists.

Four distinct musical personalities - or ‘temperaments’ - are represented: the dissonant Robert Parsons, the cool Ferrabosco the Elder, the warm and sanguine Thomas Tallis, and the polar opposites of ecstasy and melancholy of William Byrd.

BBC Radio 3’s Andrew McGregor praised Phantasm's recording of the Mass in Four Voices played on viols alone: ‘for stylistic insight and subtlety is ironically one of the most satisfying performances of Byrd's Mass'.

Phantasm has re-defined the art of viol playing. Inspired by the great 20th century string quartets, the striking unity and suave sonorities are unmatched by any other viol ensemble playing today.

Phantasm has been widely acclaimed for its previous recordings with Linn - its 2011 recording of William Byrd was named ‘Disc of the Month’ by BBC Music and its 2009 Linn debut of music by John Ward was described as ‘stunning’ by Gramophone. The award-winning ensemble has been applauded across the globe for its moving performances and is recognised as the most exciting viol consort active on the world scene today.

Critics have described their performances and recordings as 'intoxicating', 'revelatory', 'electrifying', 'interpretations pervaded by a truly burning spirit'.

The quartet’s international members (from Britain, Finland and the US) are based in Oxford and have toured extensively throughout Europe, North America, and East Asia. They are joined by Emilia Benjamin and Asako Morikawa for this performance.