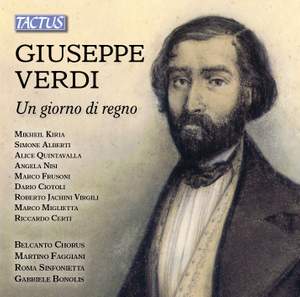 it is well recorded with a pleasingly direct quality of sound. And whilst nobody here is a great performer, everyone is accomplished: Martino Faggiani conducts the Roma Sinfonietta with some... — Opera Now More…

Act I: Per si fausto matrimonio

Act I: In qual punto

Verdi’s early production includes an opera, Un giorno di regno, that had a particularly unlucky fate. After the success of his first opera, 'Oberto, conte di San Bonifacio', Verdi was given the task, by the impresario Bartolomeo Merelli, of composing a comic opera for the Teatro alla Scala;, but this work coincided with the death of his wife, which took place shortly after the death of his two sons.

The levity of the subject-matter of this opera was inevitably incompatible with Verdi’s grief. His opera was a complete fiasco at the premiere of 5 September 1840 in Milan, and was withdrawn that very evening. The newspapers were particularly cruel to the composer, so much so that almost twenty years later Verdi, in a letter to his publisher Tito Ricordi, wrote that they had mistreated “the work of a poor young man who was ill, rushed, and devastated by a horrible calamity”. In the same letter, Verdi added that, even supposing that Un giorno di regno was a bad opera, many others “that were no better than it have been tolerated and maybe even applauded”.

Five years after its first night, after Verdi had met with a real triumph with Nabucco, Un giorno di regno was quite successful in Venice at the Teatro San Benedetto. In fact, to present-day listeners, this opera is far from being as disastrous as it has been considered for many years.

it is well recorded with a pleasingly direct quality of sound. And whilst nobody here is a great performer, everyone is accomplished: Martino Faggiani conducts the Roma Sinfonietta with some élan, and the Belcanto Chorus is idiomatic.