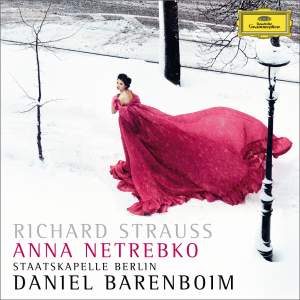 • Netrebko is a phenomenon. The world’s best-selling active soprano and quite simply, the undisputed superstar – “la prima donna assoluta" (New York Post) – of opera today. Known equally for her poise, her sensuality and her voice’s unmistakable color, Strauss’s elegiac Four Last Songs are an exquisite vehicle for her expressive gifts: Netrebko’s first recording of these gorgeous, iconic songs.

• Barenboim: conductor, pianist, humanitarian - perhaps the world’s most complete living musician. A venerated interpreter of Wagner, Mozart, Beethoven and Bruckner, in many ways the music of Richard Strauss represents the apotheosis of Barenboim’s musical ethos. In 1954, the then 11 year-old Barenboim was introduced to his idol, conductor Wilhelm Furtwängler. It was Furtwängler who conducted the world premiere of Strauss’ Four Last Songs in 1949

• The Staatskapelle and Barenboim then interpret Ein Heldenleben, one of the most vivid and popular tone poems by Strauss, who himself was Generalmusikdirektor of the Staatskapelle a century ago.

Netrebko sings with an opulence of voice and colour that doubters should be silenced.

[Netrebko] radiates a gorgeous tone, beautifully calibrated in mood and inflection...Barenboim [is] thoroughly at one in finding the music's natural contours and the significant points of instrumental detail...he directs a dramatic but reasoned interpretation [of Ein Heldenleben], by no means grandstanding or overinflated but following the musical narrative with clear ideas

She brings a suitably dusky, veiled tone to the entire cycle, with plenty of colour and presence in the middle and lower reaches of the voice...she doesn’t go in for the very detailed word-painting of some earlier recordings, but her broader approach to text comes with its own pay-offs: the mood of each phrase is exquisitely judged, and everything feels fresh and spontaneous rather than micro-managed.

[Barenboim's] performance revels in the colours that this fabulous orchestra draws from the score...Barenboim’s account doesn’t swagger as much as some, favouring Wagnerian weightiness instead. It’s the orchestral playing the solo horn and violin especially – that’s the real treat in the Four Last Songs, too.