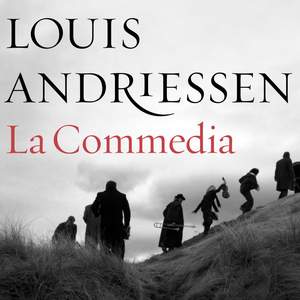 it is encouraging to hear Andriessen himself shifting his language decisively away from everybody else's pigeonholed view of his music...Reinbert de Leeuw directs the combined ASKO and Schonberg... — Gramophone Magazine, Awards Issue 2014 More…

Part I: The City of Dis, or The Ship of Fools

In the composer's words, "The simultaneous existence of heaven, purgatory, and hell; parallels between various scenes; and the use of film and stage effects all create the complexity that is necessary to do justice to Dante's greatest creation. To this end, all events portrayed on the film screen and on stage, including dance, the spoken word, and song, should be regarded as a reaction to the music."

Dutch composer Louis Andriessen's music has explored politics, time, velocity, matter, and mortality in five works for large ensemble: De Staat (Nonesuch, 1991), De Tijd (Nonesuch, 1993), De Snelheid, De Materie (Nonesuch, 1996), and Trilogy of The Last Day. In addition to La Commedia, his stage works include the operas Writing to Vermeer (Nonesuch, 2006) and Rosa: The Death of a Composer (Nonesuch, 2000), as well as the monodrama Anaïs Nin. Nonesuch also released an album with his De Stijl and M Is for Man, Music, Mozart in 1994.

Hal Hartley is an American independent filmmaker (writer, director, producer, and composer) active since 1989. His films include Trust (1990, winner best screenplay Sundance Film Festival), Henry Fool (1998, winner best screenplay Cannes Film Festival), and Meanwhile (2010). He has written and staged his play Soon at the Salzburg Festspiele in Austria (1998) and in America (2001). His association with Louis Andriessen began with the short film The New Math(s) in 1999. Hartley has just completed shooting his 13th feature film, Ned Rifle. He lives in New York.

it is encouraging to hear Andriessen himself shifting his language decisively away from everybody else's pigeonholed view of his music...Reinbert de Leeuw directs the combined ASKO and Schonberg ensembles with clinical, steadfast accuracy - getting music of this complexity right must be hell.

The intersecting between stage and film is beautifully handled in the DVD. It represents a huge advance over an early example of the technique. The score, five movements of about twenty minutes each, is enormously attractive. Andriessen’s music shows the influence of Messiaen in rhythm and melody, though the harmonic sense is pared down.