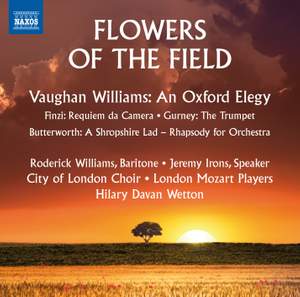 Offer, Flowers of the Field

this is an unusual and moving programme...[Finzi's] Masefield and Hardy settings, less mature than Dies Natalis, remained unperformed in his lifetime, but Davan Wetton and excellent soloists... — BBC Music Magazine, January 2015, 4 out of 5 stars More…

II. How Still This Quiet Cornfield Is To-Night

III. Only a Man Harrowing Clods

IV. We Who Are Left

These composers were all affected by the carnage of World War I, and their elegiac music expresses regret and lost innocence, love won and lost, sacrifice and death. George Butterworth’s A Shropshire Lad, conceived as an epilogue to his Housman song cycles, encapsulates the poet’s sense of life’s transience. Ivor Gurney was both shot and gassed in 1917, and The Trumpet pleads with mankind to set aside the folly of war. Heard here in a new completion, Gerald Finzi’s Requiem da Camera mourns the death of his mentor

Ernest Farrar and those of other fallen artists, and Ralph Vaughan Williams’s An Oxford Elegy recalls lost friends with an intense and magical nostalgia.

this is an unusual and moving programme...[Finzi's] Masefield and Hardy settings, less mature than Dies Natalis, remained unperformed in his lifetime, but Davan Wetton and excellent soloists Roderick Williams find real depth in them...An Oxford Elegy, though, is the major work here.

To mark Remembrance Day this disc collects works by English composers affected by the first world war. Unlike their compatriot poets, the composers responded with uniformly elegiac feelings.

Irons makes an understated reader for An Oxford Elegy...He is deftly supported by the London Mozart Players, whose wind solos throughout the disc are especially fine. The only blot on this pastoral landscape are the chorus, who lack the vocal youth and energy so crucial to this collection of young men's music.

this version [of the Requiem da Camera], intelligently paced by Hilary Davan Wetton with Roderick Williams as the matchless baritone soloist, is a significant addition to the Finzi catalogue...it’s the Finzi especially that makes the disc so worthwhile.