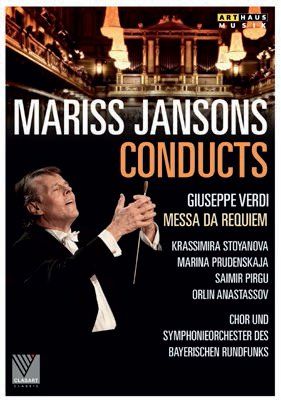 the soloists form a worthwhile and generally high quality quartet. Krassimira Stoyanova's soprano is even and expressive, and she brings real urgency to proceedings...[Prudenskaya] produces steady,... — BBC Music Magazine, March 2015, 4 out of 5 stars More…

The four outstanding soloists fuse together to project a vast range of emotions, from whispered reverence to emotional upheavals. While Bulgarian soprano Krassimira Stoyanova has been closely associated with the Wiener Staatsoper for several years now, mezzo-soprano Marina Prudenskaya has been steadily building her international career, one major role after another. Albanian-born tenor Saimir Pirgu was chosen by Claudio Abbado at the young age of 22 to sing Ferrando in “Così fan tutte.” Bulgarian bass Orlin Anastassov, meanwhile, has established himself as a superb Verdi singer.

Verdi’s “Messa da Requiem” is in itself a work of superlatives: a towering structure of blazing brass, mighty choral masses and tour-deforce passages for four soloists... a work of deepest and most heartfelt intimacy... a mass for the dead without any mawkish undertones... Quite possibly the foremost achievement in 19th-century liturgical music.

the soloists form a worthwhile and generally high quality quartet. Krassimira Stoyanova's soprano is even and expressive, and she brings real urgency to proceedings...[Prudenskaya] produces steady, lovely tone throughout...Pirgu supplies bold and bracing vocalism...Jansons draws a performance of fluidity and wide dynamic range from his visiting Bavarian forces.

[Jansons's] Requiem is a series of coups d'etat in which the returns of the actual 'Dies irae' or the launch of 'Rex tremendae majestatis' are exciting aural shocks. He also devotes much time to enjoying slow quiet endings of movements for emotional effect...The choir (prepared by Michael Gläser] is superb from its quiet but very clear beginning onwards. It's atmospherically filmed without encompassing a tour of the venue.