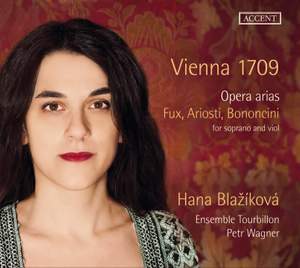 The young Czech soprano Hana Blažíkóva is one of the most exciting voices in the baroque scene. Conductors such as Philippe Herreweghe, Masaaki Suzuki and Vaclav Luks frequently invite her for CD recordings, concerts and tours. She regularly appears at renowned festivals including Prague Spring, Festival Oude Muziek Utrecht, Resonances in Vienna and the Early Music Days in Regensburg.

The title 'Vienna 1709' is representative of those arias from operas and oratorios that were composed during the first two decades of the 18th century in Vienna especially for the birthday or namedays of members of the imperial family. This selection presents arias of Fux, Ariosti and Bononcini in which the solo voice enters into a dialogue with one of several violas da gamba. Ensemble Tourbillon, under the direction of the Prague gambist Petr Wagner, supports Hana Blažíkóva and her clear, angelic soprano voice - capable of both virtuosity and delicate sensitivity.

This lovely collection reveals a repertoire of exceptional quality … an imaginative issue that makes for beguiling listening.

Blazikova and Wagner work well together, with her shining tone sitting with the warmth of the instrument.