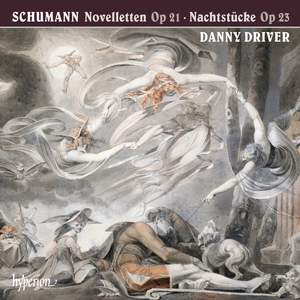 Driver proves at once with the first Novellette that he is alive to the composer's robust, macho side and its inverse, those luminescent and melting atmospheres...This is, in short, engaging... — BBC Music Magazine, Christmas 2014, 4 out of 5 stars More…

No 6 in A major. Sehr lebhaft, mit vielem Humor

No 7 in E major. Äusserst rasch

No 4 in F major. Einfach

No 2 in F sharp major. Einfach

In this new album Danny Driver brings his impeccable pianism, consummate style and imagination to Schumann’s Novelletten and Nachtstücke, less well-known sets from his extraordinary output for the piano.

Schumann wrote Nachtstücke, a set of four character pieces, upon the death of his brother, and would have entitled it ‘Corpse Fantasia’ were it not for Clara’s intervention. The eight pieces of the Novelletten form what is at once the largest and the least known among Schumann’s major piano cycles. The music itself is of consistently high quality (years later, Schumann himself still regarded this among his most successful works), and clearly written in an exultant mood.

Driver proves at once with the first Novellette that he is alive to the composer's robust, macho side and its inverse, those luminescent and melting atmospheres...This is, in short, engaging and sophisticated playing with a fine mix of care and spontaneity.

Driver shows his mettle in offering the full sets of both pieces, with much poetry and no unwanted exaggeration.

Driver is commanding and personable. He never fails to establish character and to provide the understanding and flair of a virtuoso in leading us on, in getting from one thing to another. The only qualities I miss are a measure of ease with the continuity and greater differentiation in the sound and movement.

[Driver], who is going from strength to strength at the moment, turns in a powerhouse performance on his new Schumann album, playing with great technical prowess, and admirably alert to the fluctuations of mood and feeling within the prevailing intensity of the whole.

there is an unbroken thread of thought running through Driver’s interpretation, with the fluxes of harmony and nuances of dynamics artlessly etched in and a natural flow and impetus to the music from the very start to its hushed finish...This is playing of a most perceptive order.