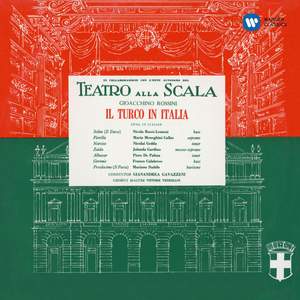 Callas’s two comic roles were both in operas by Rossini: Il barbiere di Siviglia and Il turco in Italia. She first played the capricious and flirtatious Fiorilla – a married Neapolitan woman who takes up with a visiting Turk – in Rome in 1950. Five years later, at La Scala, she appeared in a production by Franco Zeffirelli, also, famously, the director of her Covent Garden Tosca and Paris Norma. Gramophone wrote: ‘Mme Callas acts vividly, chiding, boasting, melting, and when in typical Rossinian style she is given a “key” figure, each repetition of it carries, so one thinks, a slightly different meaning. I found myself teased by memories of these little phrases for hours afterwards.’