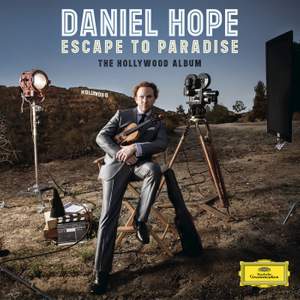 David talks to the violinist about his new disc of music by composers in exile in the US.

The album also contains contemporary soundtrack classics such as Schindler´s List, American Beauty and Cinema Paradiso to reflect on the strong musical influence the Exile composer had and still has on contemporary film composers.

Guest artists featuring on this record are no one less than Sting who performs in a new arrangement on “The Secret Marriage” – a Hanns Eisler composition (originally with lyrics of Bertold Brecht, to which Sting wrote his own lyrics back in 1987) – and German singer phenomenon Max Raabe on the famous “Speak Low” by Kurt Weill. Top Arranger Paul Bateman provided brand new orchestral arrangements.

Pieces played in new arrangements bask in the luxuriantly romantic world of Korngold, Rósza and their contemporaries.

At the heart of this disc is his swashbuckling performance of Korngold's Violin Concerto, where Hope brings off with aplomb the tension between the work's contrasting lyrical ideas and the electric energy of the virtuoso writing. It's as if he had in mind the screen hero Errol Flynn

the real singing comes from Hope’s violin, soaring through an agreeable selection from the works of European composers who found refuge in California. The highlight is Korngold’s Violin Concerto, luxuriously rendered with the Royal Stockholm Philharmonic and conductor Alexander Shelley.

Daniel Hope shines a new light on the Sound of Hollywood.