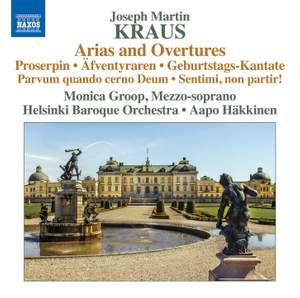 Joseph Martin Kraus was one of the most talented and progressive composers of the 18th century, and regarded by Haydn as one of the only two geniuses he knew, alongside Mozart. Following the successful audition of his opera Proserpin, Kraus became closely associated with the court of Gustav III in Stockholm. The highly dramatic Begrafnings-kantat overture was the composer’s emotional response to the assassination of his sovereign. The vocal pieces include works performed for the first time in over two centuries, ranging from Italian concert arias to rare survivals from the Royal Dramatic Theatre.