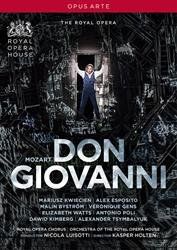 Holten shows us Giovanni as a man older than usual, lonely, perhaps trying to stave off his fear of death with each new seduction...Some of the singing would not pass muster on CD. But the acting... — Gramophone Magazine, December 2014 More… 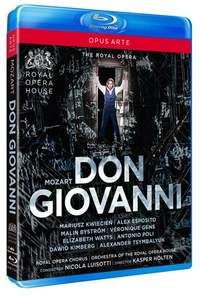 Katherine talks to the director of the Royal Opera House about his recent production of Mozart's darkest opera, out now on DVD and Blu-ray and due for revival in the spring.

Mozart’s sublime tragic comedy offers boundless scope for directors, and Kasper Holten has chosen it to follow his directorial debut of Eugene Onegin. He wanted to shift the emphasis from Don Giovanni’s sex life into a darker place, showing Giovanni’s womanizing as an attempt to stave off his own mortality. Each woman he seduces represents a life he could have had. Though it is a dark piece, Holten handles it with a light touch and works with a superb cast – Mariusz Kwiecien, one of the world’s leading Don Giovannis, Alex Esposito, a fresh, vigorous Leporello and acclaimed French soprano Véronique Gens.

Set designs including innovative use of projections are by Es Devlin (most recently at the Royal Opera House with Les Troyens), Nicola Luisotti conducts.

Holten shows us Giovanni as a man older than usual, lonely, perhaps trying to stave off his fear of death with each new seduction...Some of the singing would not pass muster on CD. But the acting is beyond praise...Kwiecien has a dangerous charm and Alex Esposito, more friend than servant, is a perfect foil.

anyone who misses Mariusz Kwiecien's performance here will regret it...never have I seen a final scene so aggressively personal, so mad, so viciously without repentance...Watt's Zerlina is charming and pure-toned. Alex Esposito offers a star turn as Leporello...The Covent Garden forces are downright magnificent.

Holten’s treatment of the characters—especially the women, all strongly cast—is fascinating. Donna Anna (Malin Byström, impassioned and visually striking) is torn between her physical attraction to Giovanni and her desire for vengeance, even feeling complicit in her father’s death. Donna Elvira (Véronique Gens, vulnerable and vocally stylish) is demonstrative in expressing her true love for Giovanni as well as her rage. Zerlina (Elizabeth Watts in game form) is eager for a one-time fling with a nobleman.

Admittedly it’s technically superb. The cast is variable. Mariusz Kwiecien´’s Don is well sung and acted, but on neither account explains his allure...Esposito is a detailed Leporello...Elizabeth Watts provides attractive tone and presence and Antonio Poli’s Ottavio is cleanly sung. Nicola Luisotti conducts briskly from the fortepiano.