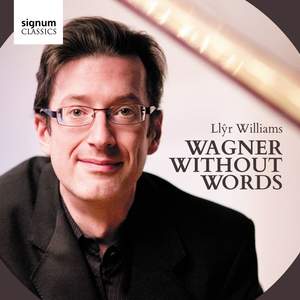 It makes for a varied and rewarding programme enriched by Williams's velvet touch, meticulous voicing, attention to detail and judiciously graded dynamics. For me, he is at his best in the music... — Gramophone Magazine, November 2014 More…

Wagner: Sonata for the Book of Mrs. M. W.

Featuring insightful arrangements of Richard Wagner’s operas by Franz Liszt and Glenn Gould (as well as Williams’ own arrangement of music from 'Parsifal'), at the centre of the programme is a selection of Wagner’s own piano pieces – many of which were written earlier in his compositional career, hinting at the grand operatic masterworks which were yet to come.

It makes for a varied and rewarding programme enriched by Williams's velvet touch, meticulous voicing, attention to detail and judiciously graded dynamics. For me, he is at his best in the music from Parsifal.

The Welsh virtuoso’s idea of juxtaposing a selection of Wagner’s uneven piano works with transcriptions is pianophile catnip...Williams’s reduction of Glenn Gould’s four-hand Meistersinger Overture and his own Parsifal arrangements are highlights. An uplifting disc.

It's a totally convincing collection, and technically superb; Williams is equal to the toughest challenges that Liszt presents, but always puts Wagner first...everything has a sense of dramatic purpose, as well as power and tonal beauty; the colours Williams creates from the keyboard in Siegfried's Rhine Journey and the Parsifal suite are radiant and entrancing.

this set can be heartily recommended for its combination of contents, and there can be no question that it marks a labour of love, and a journey of discovery and creativity, for the pianist. Those who appreciate a carefully considered approach to Wagner’s music may well enjoy Williams’s unfailing musicality.