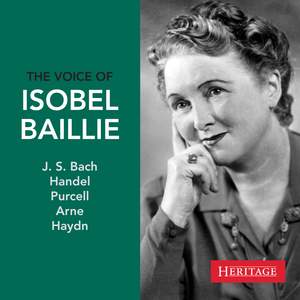 The Voice of Isobel Baillie

This close focus on Baillie in the 1940s is a rewarding one. — MusicWeb International, 3rd November 2014 More…

Purcell: Stript of their green

Arne: Where the Bee Sucks

How beautiful are the feet

If God be for us

trad.: Comin’ through the rye

Dame Isobel Baillie [1895 – 1983] was the leading British concert soprano of the first half of the 20th century. Her style was characterised by a focussed tone, clear diction and a speech-like and natural approach to phrasing. Her strength was in British music, including Vaughan Williams' 'Serenade to Music' (of which she was one of the original singers) and Elgar's 'The Kingdom'. With the exception of 1933, she sang at the Three Choirs Festival every year from 1929 to 1955; she sang 'Messiah' for the Halle Orchestra annually for 26 consecutive seasons and for the Royal Choral Society at the Royal Albert Hall on 33 occasions. She was appointed a Commander of the Order of the British Empire (CBE) in 1951, and was promoted in 1978 to Dame Commander (DBE).

This Heritage release showcases her artistry in repertoire with which she had a close affinity - Purcell, Arne, Bach, Handel and Haydn in recordings that date from 1941 to 1949 with a variety of orchestras, conductors and accompanists. New transfers.

This close focus on Baillie in the 1940s is a rewarding one.

These recordings from the 1940s show why the Scottish soprano was so popular. The orchestral accompaniments may be stodgy by modern Handelian standards, but Baillie’s crystal-clear voice speaks out loud and bold...She sings Purcell with the essential firmness of line that some modern singers neglect.

This new compilation demonstrates perfectly [the] special quality of her voice: a pearly, clarion tone with a shining vibrato that did not preclude real focus...Baillie's clarity shines through some cotton-wool accompaniments from Malcolm Sargent and others: for better or worse, this is a precious glimpse into a vanished musical world.