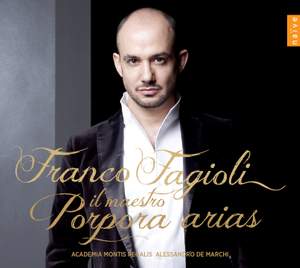 Fagioli forges his own powerful execution out of practices that Porpora helped invent. Ornaments of fiendish length, tempo and range spur Fagioli onto ever-greater displays, racing ahead of the... — BBC Music Magazine, March 2015, 4 out of 5 stars More…

Katherine talks to the virtuoso Argentine countertenor about his remarkable voice and his new album of arias by the great Neapolitan singing-teacher and composer Nicola Porpora.

Following 'Arias for Caffarelli', a major hit for naïve, this new recording from Franco Fagioli, offers 12 opera arias by Nicola Porpora, who was both a composer and the teacher of Caffarelli and Farinelli, among many others. Franco, through his amazing technique and breathtaking emotional power, pays tribute to the original and refined vocal art nurtured by Porpora in the framework of Naples in the 18th century. The recording features hits such as Polifemo’s 'Alto Giove' but also lesser-known scores, all performed with baroque specialists Academia Montis Regalis, conducted by Alessandro de Marchi.

Fagioli forges his own powerful execution out of practices that Porpora helped invent. Ornaments of fiendish length, tempo and range spur Fagioli onto ever-greater displays, racing ahead of the band. He is intense, yet precise, with a three-octave register that is astonishingly rich from top to bottom.

Fagioli sings with fulsome bravado and technical virtuosity...[and] regards Porpora's arias as a laboratory for learning.

The technical gifts of the modern counter-tenor have increased enormously in the last few years and Fagioli is undoubtedly one of the new masters…superb singing and impressive orchestral playing.

Fagoli [is]…the possessor of one of today’s most complete vocal techniques… The support from De Marchi and his orchestra is first rate…anyone who loves great singing should hear the CD. It is a disc in a thousand, which deserves to garner awards galore.

Fagioli is an utterly beguiling interpreter, both in the big display pieces, where his vocal athleticism is staggering, and in slower, more intimate numbers...where both he and Porpora are at their most affecting...There’s terrific playing, too, from the Academia Montis Regalis under Alessandro de Marchi.

the vocal agility, the virtuoso coloratura – and actually, the pitch – are simply astonishing…This is a CD to encourage you to pack your bags, head for sunnier climes and find out more about Porpora, preferably taking Fagioli as your guide.