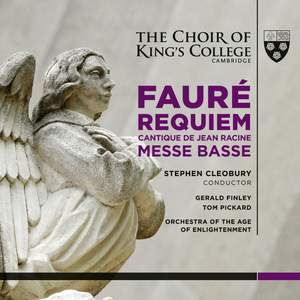 Choir of King's College Cambridge & Orchestra of the Age of Enlightenment, Stephen Cleobury

an engaging and admirable performance … what’s not to like about this release? Highly recommended. — Choir & Organ, November 2014 More…

In January 2014, the Choir of King’s College Cambridge were joined by the Orchestra of the Age of Enlightenment and former choral scholar Gerald Finley to make the first recording of Marc Rigaudière’s new reconstruction of the first complete liturgical performance of Fauré’s 'Requiem'. This version employs a small orchestra of violas, cellos and basses, augmented by solo violin in one movement and brass in several more.

Under the direction of Stephen Cleobury, the Choir of King’s College, Cambridge has faithfully recreated the 1889 premiere, even using the organ stops available to the organist at the Cathedrale de Ste. Madeleine in Paris. The instruments and techniques used by the orchestra are typical of those used in a French orchestra of the late 19th century. 'Pie Jesu' is sung by treble Tom Pickard, in his final year as a chorister at King’s College School. The baritone solos are sung by Gerald Finley, who attended King’s College as an undergraduate choral scholar. Gerald Finley says of the recording, “It is such a joy to sing with the best choir in the world. Being part of this Fauré 'Requiem', a piece I have known since a chorister in Canada, with the Orchestra of the Age of Enlightenment and Stephen Cleobury, is a dream come true.” In the original version of the Requiem, the baritone solo of the 'Hostias' was heard alone, without the bookends forming the Offertorium. The expanded version, as edited by John Rutter, is also included on this album for comparison. Fauré's 'Requiem' forms a cornerstone of the Choir’s touring repertoire, and is performed many times each year, both with orchestras and organ accompaniment, along with the 'Cantique de Jean Racine', heard here in its original version for Choir and Organ. These works are complimented by the 'Messe Basse' for high voices, sung by the 16 choristers of the choir.

an engaging and admirable performance … what’s not to like about this release? Highly recommended.

The viola-led OAE offer superb support throughout and the baritone Gerald Finley is at his most tonally liquid, with tenaciously sensitive phrasing...The choir respond magnificently [in the Libera me].

Not only is it beautifully sung and played but the recorded sound on the choir’s own label is remarkable.

The choir sings very well indeed – as you’d expect … Gerald Finley, another former King’s Choral Scholar, I believe, represents luxury casting for the baritone solos and his contribution is distinguished: I relished his warm, firm tone and the way in which he articulates the text … Tom Pickard…makes a splendid job of the solo, singing in an innocent, unaffected way and with exemplary control. Bravo!

A familiar choral masterpiece in unfamiliar guise: the first recording of Fauré’s Requiem in Marc Rigaudière’s reconstruction of the first complete liturgical version, in 1889. Striking differences include darker orchestrations, a shorter Offertoire and plainer rhythms. That’s beautifully realised here by the period instruments of the OAE and the King’s College Cambridge Choir.