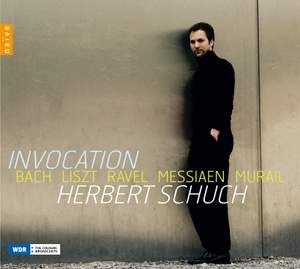 This thoughtfully themed recital testifies to the wide terms of reference that the Romanian-born pianist Herbert Schuch has at his disposal in choosing his repertoire...Schuch's mastery of colour... — Gramophone Magazine, December 2014 More…

In the line of a large discography, including 8 cds for Oehms Classics, reflecting a wide diversity of repertoire, pianist Herbert Schuch has built his debut CD for Naïve on the sound of bells. "Two things about them stimulate my imagination", says the pianist, "the wonderful richness of the partials in large bells, and the chaotic-seeming rhythmic interference of a confused peal of bells, which generates constantly changing structures and patterns in the listener’s brain." So it is hardly surprising that Schuch should build a complete programme on the theme of ‘invocation – the call of bells’ and perform works that express in instrumental terms the emotional appeal conveyed by the sound of bells and their sublimated sacral character.

Herbert Schuch was born in Temesvar (Romania) in 1979. After early piano lessons in his home town, he emigrated with his family in 1988 to Germany, where he now lives. Recently Herbert Schuch has been influenced by his encounters and work with Alfred Brendel. He initially attracted international attention when he won three important piano competitions: the Casagrande, the London International Piano Competition and the International Beethoven Piano Competition in Vienna, all within the space of a single year.

This thoughtfully themed recital testifies to the wide terms of reference that the Romanian-born pianist Herbert Schuch has at his disposal in choosing his repertoire...Schuch's mastery of colour and of summoning up the composers' creative individuality shines different lights on his invocatory stimulus, and the entire recital is much more than the sum of its parts.

One of the best, smartest, and most interesting of the century’s new pianists… Odds are you’ll join the cult of fans who wait impatiently for every new Herbert Schuch release. Naïve provides their typical brilliant engineering.