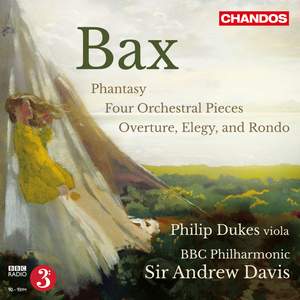 Dukes deliver the Phantasy's solo part with a forthright energy that seems to thwart loveliness of tone. In every other department these performances could hardly be finer. The orchestral playing... — BBC Music Magazine, November 2014, 4 out of 5 stars More…

II. Dance in the Sun

III. From the Mountains of Home (In the Hills of Home)

IV. The Dance of Wild Irravel

Bax: Phantasy for Viola and Orchestra in D minor

James listens to the culmination of Chandos's Bax project, including the first ever recording of his Four Orchestral Pieces, conducted by Andrew Davis.

Sir Andrew Davis is among the most distinguished interpreters of British music today and here turns to the works of Sir Arnold Bax. With the inclusion of the Phantasy for Viola and Orchestra, this disc marks the completion of Chandos’s long project to record Bax’s complete orchestral music over time.

Born in 1883 into a wealthy family in London, Arnold Bax began a love affair with Ireland as a young man. He moved there in 1911 and his Four Orchestral Pieces from 1912 – 13 are deeply influenced by the landscape of the countryside near his Dublin home. The first three are better known in revised versions, from 1928, as Three Pieces for Small Orchestra. Here ‘The Dance of Wild Irravel’ joins the other three movements for the premiere recording of the four Pieces as Bax originally conceived and orchestrated them.

The Phantasy for Viola and Orchestra from 1920 was inspired by the strong feelings with which Bax responded to the Irish political turmoil at the time, underlined by his use of the Sinn Fein Marching Song (later the Irish national anthem) at its climax. Bax is celebrated for his melodic invention and this passionately lyrical score must be one of the finest examples of his gift. Here the soloist is Philip Dukes, described by The Times as ‘Great Britain’s most outstanding viola player’.

By 1927 Bax’s style was changing and the opening of the Overture, Elegy and Rondo is reminiscent of a classical concerto, suggesting a leaning towards then-fashionable neoclassicism. The long, dreamy melody of the middle section and brilliant, colourful orchestration, however, are unmistakable hallmarks of Bax’s individual voice.

Dukes deliver the Phantasy's solo part with a forthright energy that seems to thwart loveliness of tone. In every other department these performances could hardly be finer. The orchestral playing is vivid and precise, as is the recorded sound; and Davis's conducting is a masterclass in how to conjure atmosphere.

there's little with which to quibble performance-wise...Drawing some first-rate playing from the BBC Phiharmonic, Davis imparts plenty of confident swagger and twinkling fun to both outer movements...every Baxian will surely want to investigate this new Chandos survey.

Dukes's tone is quite lovely: rich and full in the lower register, confident and singing up top...what a pleasant surprise this disc has turned out to be...I hope that all lovers of English music will want to explore this disc, and will delight in its many musical treasures!

Dukes is a sterling advocate of this unjustly neglected work — the haunting cor anglais solo recalls the shepherd’s lament in Wagner’s Tristan — while Davis proves passionate in the impressionistic Four Orchestral Pieces and the powerful, dark Overture, Elegy and Rondo.

Though stylistically the two works [Overture, Elegy and Rondo and Four Orchestral Pieces] have their differences...both works reveal the same sure-footed handling of the orchestra, which these carefully manicured performances under conductor Andrew Davis show off beautifully.