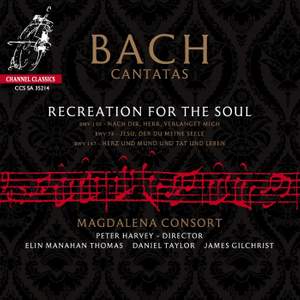 Bach Cantatas: Recreation for the Soul

The four voices are fairly matched with each other, less so with their instrumental colleagues, and Harvey leads unfailingly elegant interpretations. At each turn, however, they yield to the... — Gramophone Magazine, Awards Issue 2014 More…

Bach's ambition to compose a body of 'well-regulated church music' – liturgical music for the entire church calendar – produced a wealth of sacred cantatas. Around two hundred have survived, and are an eloquent expression of his opinion that 'true music should be for the honour of God and the recreation of the soul'. That comment – made with respect to the art of realising a figured-bass (where harmony is indicated by numbers) – seems appropriate to this collection, since the choice of these glorious works was influenced by a consideration of number symbolism and other extramusical devices. That this most cerebral music touches the emotions so keenly might seem a paradox, but as a performer, analysing the possible thinking behind Bach's musical decisions brings the composer closer. (Peter Harvey, liner notes)

The Magdalena Consort was founded in 2008 by Peter Harvey and is acclaimed for its virtuoso chamber performances of sacred vocal music from Monteverdi to Bach. In addition to using period instruments, the group aims to perform with historically appropriate numbers of players and singers, which encourages the chamber-music approach which is central to its vivid sound. Joshua Rifkin was the first to argue that Bach commonly performed his vocal works with one singer per part, rather than employ a 'choir' in the traditional sense, and it is this approach that the Magdalena Consort adopts. It is fair to say that there is still a healthy debate surrounding the question, but, from a performer's perspective, this approach facilitates communication between the performers so that the counterpoint – the independence of individual musical lines which so strongly characterises Bach's music – can be enjoyed with the maximum freedom. The singers associated with the Magdalena Consort are well established as international soloists, besides having considerable experience of ensemble singing, and the instrumentalists are drawn from some of the world's best-known period instrument orchestras and chamber groups.

The four voices are fairly matched with each other, less so with their instrumental colleagues, and Harvey leads unfailingly elegant interpretations. At each turn, however, they yield to the textual and expressive detail of The Bach Players.

Buoyant and agile in performance, small in scale and steeped in the best traditions of period playing – putting musicality over scholarship – the Magdalena Consort was founded in 2008 by bass/director Peter Harvey...The Magdalenas are the next generation, heading out alone. if you don’t know them, try this brilliant disc.