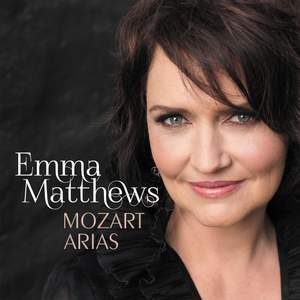 Matthews sets out her stall with a busy, generalised aria from the 15-year-old composer's Il sogno di Scipione, the coloratura absolutely spot-on both in rhythm and pitch...Matthews captures... — Gramophone Magazine, August 2014 More…

Coloratura Emma Matthews is a Principal of the Australian Opera having started her career as an Opera Australia young artist in 1993. She possesses, in abundance, a natural upper range and the agility of a leading bel canto. No role more than that of Lucia in Donizetti’s Lucia di Lammermoor shows this off. Emma undertook this role in John Doyle’s Opera Australia production in 2012 in which the reviewers commented on her conquering with ease the vocal demands, also observing that she took dramatic risks that more conservative singers of earlier generations would never have imagined.

To Mozart Arias. Of all composers, the mood and emotions in Mozart’s music are arguably the most diverse - risqué to somber through to love and the deepest depths of despair. Matthews encapsulates all of these emotions with a natural intuition, from her command and depth of tone in the ‘Queen of the Night Aria’, the intense vengeance clearly burning in her heart, the more subdued Pamina aria Ach, ich fühl’s, the loss and lament beautifully portrayed, through to her ravishing rendition of Vorrei spiegarvi the tessitura ideally suited to her voice.

This recording is a terrific blend of well-known arias, with a few lesser known, the Mozartarian vigour in abundance throughout.

Outside of Australia Emma Matthews has enjoyed several engagements highlights being her Covent Garden debut in 2010 the title role of The Cunning Little Vixen, under Sir Charles Mackerras – his last ROH engagement, and performing Mahler’s Symphony No.4 with Orchestre Philharmonique de Monte Carlo conducted by the late Yakov Kreizberg.

Emma Matthews is one of Australia’s most lauded singers, receiving seven Helpmann Awards, nine Green Room Awards, the ‘Mo’ Award for Classical Performer of the Year in 2003 and the Remy Martin Australian Opera Award. On this recording Emma is working with Slovenian conductor Marko Letonja who is Chief Conductor the Tasmanian Symphony Orchestra’s and is concurrently Music Director of the Orchestre Philharmonique de Strasbourg in France. The Tasmanian Symphony Orchestra have a fine recording pedigree and are integral to ABC Classics Australian Composer Series as well as being heavily involved in Hyperion’s Romantic Piano Concerto Series, the most recent release Williamson’s Piano Concertos with pianist Piers Lane, receiving wide acclaim and praise.

Matthews sets out her stall with a busy, generalised aria from the 15-year-old composer's Il sogno di Scipione, the coloratura absolutely spot-on both in rhythm and pitch...Matthews captures the varying emotions of 'Ah, lo previdi'.

She shows her merits straight away in Fortune’s aria ‘Lieve sono al par del vento’ from the early dramatic serenade Il sogno di Scipione, whose wordpainting coloratura she despatches to perfection and whose high tessitura presents no problems, even if her tone here sometimes verges on the brittle. Mostly, though, and with admirable consistency, her light, bubbly voice is used with great accomplishment, especially in ‘Ah, se in ciel, benigne stelle’ and the mammoth, multisectioned scena ‘Ah, lo previdi’, where she is at her most interpretatively vivid.