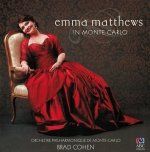 Bernstein: Glitter and be gay (from Candide)

Bel Canto Emma Matthews is the brightest star out of Australia, the most anticipated since Dame Joan Sutherland. A co-production between ABC Classics and Universal Music in Australia, this CD combines jewels from French and Italian operatic repertoire, as well as music by Bernstein and 2 Australian composers Richard Mills and Calvin Bowman.

Emma made her Covent Garden debut in March/April 2010 in the title role of Cunning Little Vixen at the Royal Opera House, conducted by Sir Charles Mackerras and her European concert debut with Orchestre Philharmonique de Monte-Carlo in Mahler’s Fourth Symphony and also her debut with conductor Vladimir Ashkenazy as soloist in Mahler’s 4.

This release highlights Romantic opera heroines the Doll Song from Tales of Hoffmann, the Bell Song from Lakme, as well as fearless and thrilling coloratura moments in Proch’s Theme and Variations and Bernstein’s Glitter and Be Gay. There are two world premiere recordings on the disc both from Australian composers - The Nightingale’s Song at the close of Richard Mills opera The Love of the Nightingale and Calvin Bowman’s song Now touch the air softly.