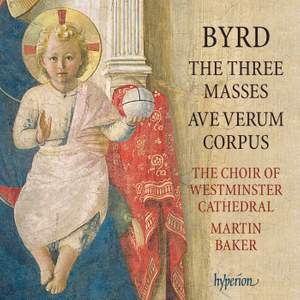 A new recording of the most perfect of Tudor masterpieces, Byrd’s three Mass-settings, from the cradle of their nineteenth-century rehabilitation. Westminster Cathedral Choir is enjoying a vintage period, and here we hear its trademark sound in all its glory: unfettered, natural singing from the trebles underpinned by warm yet clear tones from the gentlemen.

This recording celebrates Byrd’s Catholic Masses in two ways simultaneously. Most obviously, it addresses great and timeless works, which themselves address great and timeless liturgical texts. But at the same time it reminds us that the revival of Byrd’s Masses in the late nineteenth century was pioneered by Roman Catholic church choirs. This is a point worth pondering. Since the accession of Queen Elizabeth I in 1558, the choirs of England’s Protestant cathedrals and college chapels have had their own distinctive musical repertory, which has flourished and grown in unbroken tradition. The anthems and services of Thomas Tallis, for instance, have never fallen from cathedral use; they have been the epitome of Choral Evensong and Eucharist for more than four centuries. This Anglican repertory, however, is not what Roman Catholic worship requires. When major Catholic choral foundations were established in late Victorian and Edwardian England, at Downside Abbey, the Brompton Oratory, and above all at Westminster Cathedral, there was a quest for new and more relevant music; and it was at these places that William Byrd’s three Latin Masses were revived. Hence the pertinence of this recording; it celebrates that Catholic revival no less than it celebrates the works themselves.

Baker here boldly claims Byrd's three Masses for the Westminster Cathedral Choir...Despite the choir's muscle and numbers this disc's mood is intimate...Some Byrd devotees may object to Baker's preference for slow tempos, and his use of rallentandos to close movements. But the power of this performance is undeniable.

Martin Baker and his multitudinous singers...bring Byrd’s freeform melodic lines deftly into relief within a lush polyphonic texture, with emotional immediacy and a refreshing lack of fussiness

The Choir of Westminster Cathedral's approach is placid but not overly reverential: the longer-texted movements are formally clear and energetic where required...For the three-voice Mass the top voice is taken by a well-blended combination of boy altos and countertenors, making this the most distinctive interpretation of the three.

the main challenge for Christie and Les Arts Florissants in The Ways of Zion is to keep the interest and momentum alive...But Christie meets the challenge head on, creating crests of passion which stand proud of the sea of misery...The singers of Les Arts Florissants...are certainly sensitive to other forms of dignity and grandeur, especially in Caroline's funeral anthem.

Westminster Cathedral Choir may sing them with more splendour and finesse than Byrd himself would have expected, yet the results are uplifting and moving. It's no slight to these musicians to say the disc is worth buying for the Byrd scholar John Milsom's incomparable notes: a masterly encapsulation of Tudor church music history in a few dense pages.