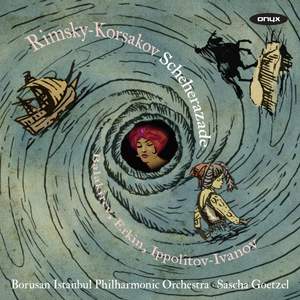 [Scheherazade] is a work that well demonstrates the orchestra's virtues, which include not only a fine set of principals who have their individual voices in the brighly hued scoring but an overall... — Gramophone Magazine, September 2014 More…

І. The Sea and Sinbad's Ship

IV. Festival at Baghdad. The Sea. The ship breaks against a cliff surmounted by a bronze horseman.

Ippolitov-Ivanov: Caucasian Sketches. Suite No. 1: II. In a Village

Ippolitov-Ivanov: Caucasian Sketches. Suite No. 1: IV. Procession of the Sardar

Recording of the Week,  Russian Orchestral Music from the Borusan Istanbul Philharmonic

Katherine enjoys an unusual take on Rimsky-Korsakov's Scheherazade from Sascha Goetzel and the Borusan Istanbul Philharmonic.

The Borusan Istanbul Philharmonic Orchestra, under the direction of Sascha Goetzel, have over the course of the past five years, built a formidable reputation as one of the most creative and exciting orchestras in Europe. Two earlier CDs for ONYX were extremely well received by critics around the world and the new release will not disappoint. Since it was founded, BIPO has worked to develop not only as an orchestra, but as a showcase for music from different traditions – a multicultural mosaic where each little stone is carefully placed with the utmost respect for its neighbour, making a unique contribution to its surroundings. This new recording explores the eastern musical roots of Europe in the late 19th and early 20th centuries, identifying elements from the eastern side of the Bosphorus which have impinged on the Western cultural background of these composers. For the first time the BIPO introduce original oriental instruments on a Scheherezade recording: between the first and second movements the oud plays a traditional melody; the violin solo recitatives are accompanied by the qanin instead of the harp; throughout the work a variety of Turkish and Arabian percussion instruments are delicately incorporated to support Rimsky-Korsakov's Arabic rhythm-writing.

[Scheherazade] is a work that well demonstrates the orchestra's virtues, which include not only a fine set of principals who have their individual voices in the brighly hued scoring but an overall warmth of tone and precision of ensemble and intonation that are hard won by newly formed orchestras. This is an attractive performance, vigorous of impulse and...pleasingly sensuous.

a terrific recording … Goetzel paces the work extremely convincingly … For daring, exotic colour, this is the most beguiling Sheherazade to have entertained me for some time.

the interludes work beautifully as palate-cleansers and serve to throw the music which surrounds them into sharper relief...The Borusan forces offer some of the most vital, vivid orchestral playing I’ve heard in a long time, whether throwing new light on an established warhorse or introducing us to relative rarities – I urge you to give them a whirl.

It might not be the ultimate performance ofScheherazade, but the exotic interpolations refresh this overplayed work and the many solo passages are played with panache.

As always, Goetzel’s orchestra buckles down with a boisterous energy that disarms criticism.